wildwestbanner%20copy1470×464 592 KB
Over on the Gauntlet Blog, I look at the history of “Wild West” rpgs, a problematic genre that like D&D emerged directly out of miniatures wargaming. While the genre’s gotten somewhat better in recent years (The new Zorro rpg, Haunted West) there’s still some cringey stuff out there. This is part of my re-visit to my History of RPG Genres lists. 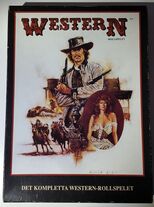 I originally wrote this list back in early 2016. The Wild West rpg remains an oddity-- trying to figure out a balance between "realism" and pop media depictions. It's also potentially a deeply flawed...

If there are any questions about the Swedish Western RPG I have the new fourth edition and at least one of the older ones. Second, probably, but I haven’t looked at it in years.

As for Avalon Hill’s Gunslinger, I played that a couple of times back in the day. It was my grail game for a long time and I finally tracked down a copy a few years back. It’s not actually that complicated to play - it’s bascially a programmed movement system with cards as randomizers - but like many Avalon Hill games of that era it has rules that don’t follow well established patterns and usually doesn’t bother explaining why the rules are written a particular way. Also the scenarios don’t even try to be balanced which makes it a very particular experience. IIRC it also has a campaign system that makes it a kinda-sorta-but-not-really RPG.