We are crowdsourcing the miscellany for Codex - Leviathan! This one is called “Three Dozen Things at the Bottom of the Ocean.”

Submissions should be no more than 2-3 short sentences. By submitting here in the replies, you’re agreeing to let us use it (you’ll get a credit on the issue). We’re looking for evocative things; the purpose of the miscellany is to inspire the reader. Please do not submit any entries with sexist imagery (we won’t publish it).

Note: if you’d like your name to be listed differently on the Codex credit, send me a DM here (but please keep your submissions in the thread).

For this miscellany, we’re looking for things that are fantastical, mysterious, and/or horrifying. Your entries can be people, places, or things. Here are some examples:

“Old King Venradon was a cruel and malignant ruler, and eventually overthrown by his people when they could tolerate his depravities no more. Knowing that his baleful priests would try to resurrect him and place him back on the throne, the revolutionaries cut off Venradon’s head, put it in a box sealed with magical wax, and threw it in the ocean. Venradon’s priests still undertook their dark rites on their lord’s behalf, and now Venradon’s muffled screams disturb passing fish while his body flails wildly in his ancestral tomb.”

“Scientists have recently detected the presence of a strange new metal near the ocean floor, perhaps released from the earth as the result of tectonic movement. In truth, the metal is from a spacecraft that entered our atmosphere many thousands of years ago, crashing deep into the sea, and only now being dislodged from the crust as its crew awakens from cryosleep and attempts to bring it back online.”

“The tales rarely speak of Baba Yaga’s sister, who lives deep in the ocean, in a house made of coral and seaweed that moves around the seafloor on giant octopus tentacles.” 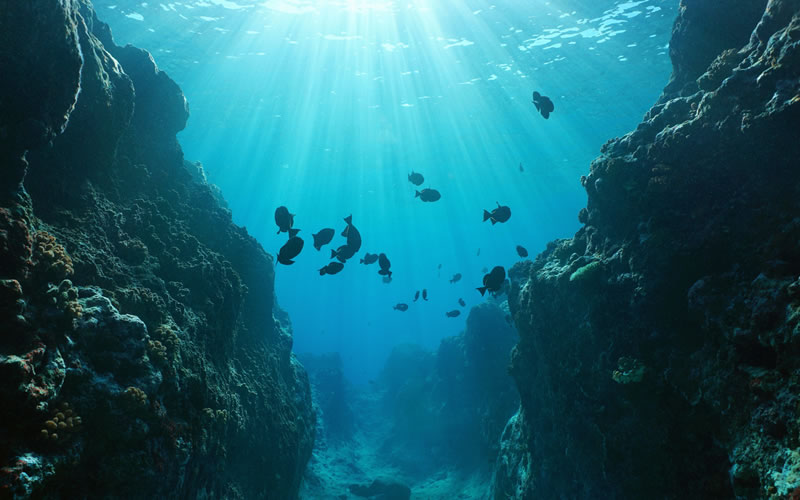 A rumor persists that eons ago, a vent existed in the ocean which would show someone’s future - perhaps the person seeing it, or someone else. Time passed - tectonic shifts, seismic events and the like pushed this vent even deeper, into the blackened depths of the hadopelagic zone, but who knows what futures could be seen now?

On his deathbed, a long-retired U.S. Navy Admiral told his granddaughter that during WWII, submariners in the Atlantic occasionally reported what sounded like knocking outside the sub while running silent. It was repetitive, in Morse code. It said, simply, “Join us.”

“Hell’s Breath” is a region of subaquatic geothermal vents deep in an oceanic trench. It’s said that occasionally they belch forth precious metals that quickly cool into strange, highly valuable forms, but the vents are just as likely to sear and boil hopeful hunters. Some come down here just to pilfer valuable gear off those who got too close.

Humans have long used the battle scars and bite marks on the hides of deep-diving whales as a guide to what strange creatures live far down in the abyss. In the last few years, however, whales in this region have started to surface, dead, covered in what is unmistakably bites from human jaws.

The HMS Serpentine, a 5th rate of little account, lost in 1788, noted in the Admiralty records only as the command of a certain Captain Jonathan Falage, a monstrously cruel man who kept a pet sow of prodigious size and allegedly fed it seamen who he disliked. It was discovered at the bottom of the Atlantic in 2004 by Uboat seeking treasure hunters, but remains unsalvaged. The ROV was lost on approach. Video shows odd illumination, presumed bioluminescent jellies, behind its stern lights, and the sonar record was corrupted with something one operator described as a “cacophonous porcine squealing”.

On Wednesdays, the Multifarious Elevator of the House of Curiosity will take you to the “sub-sub-sub-sub-basement,” opening onto a wondrous, coral-encrusted city that waits on the Atlantic seabed. Better have your diving suit on before you descend, of course. Salt water comes rushing into the elevator car as soon as the doors open on the undersea vista.

At the bottom of everything, under countless tons of black crushing water is the whale graveyard, a garden of blind red worms, transparent crabs and monumental bones. The great cetaceans come here to die when they can, settling into the mud and closing their wise eyes a final time. At the graveyard’s core, a depression of poisonously saline water creates a maze of whale mummies, untouched by scavengers. Here the currents coalesce, singing ghostly whale song through bones and bodies of a thousand submarine generations.

At the bottom of the Teardrop Sea, where warm currents from the south collide with cold runoff from the eastern glaciers, anyone with healthy lungs, determination, and clear vision can dive and visit Gulech the Undrowned. They’re held in place by thigh-thick chains and their facial expression is one of resigned patience. It’s said good fortune comes to those who apply sea snail paste to Gulech’s limbs where the chains chafe, but it’s usually snail paste vendors who say so, so who knows.

Off the coast of a tropical island, in the deepest, darkest recesses of a vast brain coral formation resting on the seabed is an air bubble. It’s the size of a small pond and through it sunshine radiates coating the coral with rippling bands of light. Upon entering the bubble from above, you find yourself surfacing somewhere else…

There is a crater: vast, circular, bordered with mounds of sand and rimmed with scree. Its inner edges harbour barnacles, mussels and periwinkles of many varieties, providing the villages nearby with all the food they may require if they are brave enough to dive so deep. Miles away is another crater no one is aware of. Further on another, smaller crater. Each crater progressively smaller, and the earthquakes have been getting more noticable.

These ancient archways stand in a line that stretches for a mile across the ocean floor, each one slighter taller and wider than the one before it. Beneath the barnacles and softly waving weeds that cling to them lie old runes almost worn smooth by water and time. On clear nights when the waves fall still and the moon’s light turns the ocean’s surface into rippling, glimmering glass, they pulse with a soft green glow.

In the shallow estuaries and mangroves North of the Pyre Sea rots a sunken fleet of stone ships, great octeres with battering engines of arcane wrath on thier moribund gundecks and cruel sharp prowed raiding hemiolia. All scuttled and drowned rather then surrendered to the victorious powers. They age, decaying in the warm sea, the old sorcery within thier white marble hulls leaking out to stain the waters with arcane esters and birth horrors, phantasms and hazards to stymie generations of salvage expeditions.

Scientists exploring the southern Pacific were confused to find that the normally flat landscape was actually not perfectly flat, but a 3 degree descent leading to a depth much further than the Challenger Deep. Following this slow descent with the eyes of the world - and world record keepers - on them, they came upon a stretch of narrow seabed over a fathomless emptiness. They reported beyond this strange abyssal bridge was a door which, upon chemical analysis and employing carbon dating, appears to have been constructed around 35,000 years ago out of solid iron.

The crew of the SS Threnody speak of a place in the north near their whaling ground where they are affected by a sudden and severe serenity. They say that several of their number dropped into the depths in a diving bell to find a simple house surrounded by shaded coral and schools of fish. Inside the house, the divers found a small pile of bronze coins - like the coins in a wishing well.

The final decree of Tide, Eternal Ruler of the Vanished Lands, was for the construction of a nearly illimitable maze within the Kolroc mountains. After the carving of the last tunnel, Tide and their royal court ventured into the maze - then the sea levels rose with the coming of the age of the Great Surge, and Tide’s Labyrinth was complete.

An undersea colony has sprung up around a series of volcanic vents, using the released geothermal energy to assist in studying a potential lifestyle under the ocean taming and utilizing the unique sea-life as domesticated livestock. If you visit, try the Squid Steak and the Shark Milkshake!

In 1968, the Soviet ballistic missile submarine K-129 sank with all hands in the North Pacific. While the Soviets were unable to locate the wreck, the United States did, and began a covert recovery operation, culminating in the CIA’s Project Azorian: a 1974 attempt to raise the sunken vessel from nearly 5 kilometers below the surface. The official story states that a mishap during recovery caused most of the K-129 to snap off and sink back to the bottom. In 2011, a manuscript began circulating on the dark web that claimed to be written by an engineer aboard the recovery vessel Glomar Explorer. The anonymous author wrote that the ship’s captain defied the CIA and ordered and end to the recovery: hydrophones connected to the hull of the K-129 picked up chanting in Russian from inside the drowned vessel. The chants were an invocation to an entity called “Dagon.”

Sailors along the Cutlass Coast sing tales of Agrakka, the Drowned Goddess: Once the commodore of a pirate fleet, she challenged Vuur the Storm-God to a fair duel in order to quiet the waters. Vuur, being fickle, accepted the challenge and manifested on the deck of her ship. The two fought for a day and a night, until Vuur grew tired and ended the fight by blowing a gale at her. Vuur’s winds blew Agrakka across the waves for many a league. She swam for many miles, and when she could no more, she called a curse upon Vuur for cheating, and drowned. The say her curse stole some of Vuur’s power, and now Agrakka walks the sea-floor, helping sailors who seek her aid by propelling ships along magical waves, and guiding them through storms.

A dragon’s hoard of things left at the beach: old bottle caps, rings, sandals, toy shovels for sand castles, a single rusted bicycle, and many many plastic bags.

Mummy, how did you and daddy meet? – I told you a thousand times already. – Again! … Please. – Once, a deep sea diver got lost in the dark depth of the ocean and fell unconscious. When she woke, she found herself in a beautiful kelp garden. She had lost her brass helmet, her hair floating like seaweed, wondering why she could even breathe …