Submissions should be no more than a few sentences. By submitting here, you’re agreeing to let us use it (you’ll get a credit on the issue). We’re looking for evocative things; the purpose of the miscellany is to inspire the reader. Please avoid anything that seems like misogyny or sexual predation—we won’t publish stuff like that.

Note: if you’d like your name to be listed differently on the Codex credit, send me a DM here (but please keep your submissions in the thread).

For examples, please see the original “Three Dozen Forbidden Texts,” linked below. Pay particular attention to the variety of things that count as “texts.” Your entry doesn’t have to be a book. 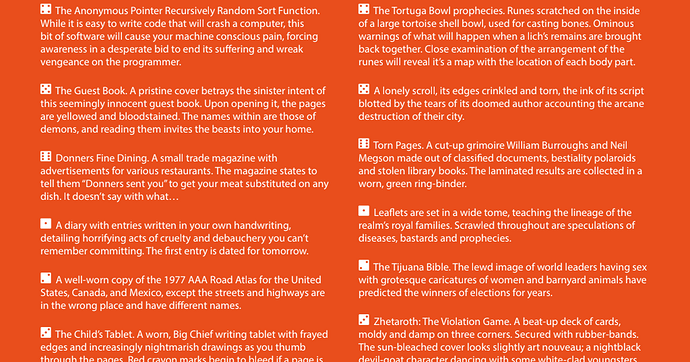 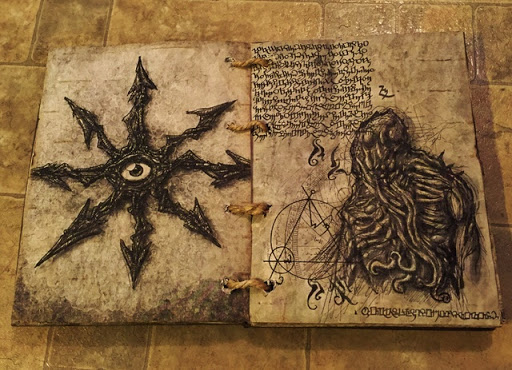 Rewarding the Bold. You can’t read ahead until you’ve done the mildly unethical or degrading act described on page one. Once you’ve done it, the next page can be read, and it reveals valuable information and a new, ever-so-slightly worse act, but it’s always your choice to go on.

The Indestructible Scroll. This five meter long scroll of linen is completely indestructible, but it can be written on by those who intend it no harm. Many have tried to burn it, lock it away, or cast it into the sea; but it always returns to a public library. Needless to say, it’s covered in indelible truths and lies.

Something You Will Hate. This chain email was one of the first blocked by spam filters and virus scanners, so it’s hard to even find anymore. Anyone gets it will read in it something that will make them more furious than anything they’ve ever read before. Most who read it forward it on to their entire address list.

Dozens of highway maps issued by a number of oil companies in the 1970s and 80s. All seem to be several decades old. Some appear water stained.
The maps routes that look to save time between certain cities, but they do not actually exist. Anyone trying to follow the maps will find themselves taken elsewhere.

A set of VHS tapes with home-made labels reading “Kookie’s Kooky Karnival” numbered 1 - 12 (7 and 9 are missing).
These appear to be recordings of a children’s show from a local access channel somewhere starring a masked clown named “Kookie”. Despite being obviously aimed at children and with children on the set, the activities in the show involve things like cannibalism and vivisection

Five filled spiral notebooks and an envelope.
The notebooks are the journals from a caver. He and two friends were illegally exploring some caves on Native American lands in Oklahoma when they found themselves in a technologically advanced but socially degenerate society. He escaped, his friends did not. The letter in the envelope explains what has happened and how he is going back to try to rescue his friends.

The Ribald’s Tale Seemingly one of Chaucer’s, though the only edition is a midcentury green perfect bound softcover from the defunct press of a small shuttered liberal art’s college. The tale within seems authentic before diverging, with its titular Ribald, into a dark forest of bloody druidic rituals for summoning and binding unseelie spirits of wood and earth into the profaned bodies of human sacrifices.

There are tales, urban legends really, of a book that appears in public libraries from time to time. It doesn’t have a Dewey Decimal number, it is plainly bound, and there is no identifying information on the spine or either cover. It is the sort of book that is almost impossible to see, especially if you’re looking for it, and people who have heard of its existence are obsessed with finding it. Supposedly, this slim volume contains the secret to living a truly happy life. Notably, none of the people who are rumored to have read it have ever been seen again.

Here are some from me!

The crib sheet of Joan Reed-Caskle
Rumored to be passed from valedictorian to valedictorian for over eight years, this single index card is said to be a cipher of every correct scantron test answer for Daisy Glen High School. Faculty routinely dismiss it as a lie told by upperclassmen, and more than one sophmore has been called to the office for trying to sell freshman hastily scribbled nonsense. Nobody can deny however that Carol Beekman is exceeding all expectations this year.

Those are great suggestions. To be considered as submissions, they should be more fictionally-specific. Does that make sense?

As in they need a narrative hook as well as a description?

this looks amazing, thank you very much.

I don’t have much to add at the moment but I did want to share this artist’s work. I often find myself going there when I want inspiration for something “forbidden.”

The Red Thangka Occasionally appearing in fine art auction catalogs since 1930, a blanket sized cotton scroll and beautiful example of Buddhist devotional art - on one side. The other side contains scribbling in Russian and diagrams in dried blood, signed by a red cavalry guard named “Andrei”, who allegedly looted the scroll after deserting from the 26th Rifle Division at the battle of Irtusk in 1920. Andrei’s writings are an odd distillation of Marxist-Leninist theory and Tibetan mysticism. Several previous collectors have attempted to have translations of the text produced, but no copy of these translations or works is known to exist. What is certain is that all previous owners have died mysteriously to violence, fire, or suicide after what their intimates report was a period of intense seclusion with the painting and growing irrational fear of ghosts.

The Voynich Manuscript is a series of quires bound together into a rather unwieldy tome. Easily twice as large as a typical book, the text is composed of vellum sheets each folded twice upon itself and layered between two planks of thin cut wood. The covers are ordained with geometric carvings that, while devilishly complex, appear soothing at a glance. Inside, the text contains a range of chapters on various topics, including (but not limited to) civics, biology, mathematics, engineering and astrology.

Unfortunately, no one can read it.

The text is written in a cipher that defies explanation. No amount of research or mystical intervention can decipher the bizarre symbols contained within. Indeed, the only reason we know what it contains is because of its pictures; which, admittedly, appear as alien as the text itself. Chapters on botany, for example, have images of plants, including close-ups and dissections; but the plants do not match any type known to botanists today.

(Obviously, this is a real-world book, and you can find more about it by searching online. I just think it’s really neat to draw upon actual sources for this sort of thing. No need to credit me; just throw your spin on it and add it to the list.)

Lord Fisburn-Smythe’s Guide to the Continent

A travel guide to Europe printed in London in 1892. Mixed in with the expected descriptions of cathedrals, festivals, and local culinary specialties are references to occult masses, human sacrifice, cannibalism, and one very detailed description of hunting humans from horseback, including butchering the corpses and the following high tea.

Our era is the only era that has ever existed. It is not the current era, for that would suggest a prior era existed. There are, of course, unfortunate people whose claims to have discovered bones of strange, unknown creatures can obviously be attributed to their mental illness because such creatures have never been seen, and The Party has thoroughly mapped and explored our world, documenting everything that exists. Still, whispers from loyal citizens that a book containing clearly manipulated photographs of such nonsense exists. The Party giving a name to such a thing would be to admit that it might exist, which it does not, so on the exceedingly rare occasions when it is discussed, the high-ranking officials present merely refer to it as The Book Of Lies.

ICTX 2019.09.09.0001-0010 is a text file transcribing the intercepted broadcast of a previously unknown obfuscated content radio signal, colloquially referred to as a “numbers station.” The summary indicates that this shortwave broadcast was repeated on multiple FM frequencies worldwide starting at 0011 (immediately after the SW broadcast concluded). Artificial intelligence has pattern matched certain digits as corresponding to the following emoji [

The Guide is supposedly the second-to-last instruction manual one will ever need, since it provides directions to create the book that will tell the reader how to usher in the end of days. Two copies are known to exist - one in the Vatican Library’s Secret Archive. The other is in the hands of a 34-year-old dude named Kyle in Ohio who still lives with his parents. I’m sure it’s fine.

A new Web site called Deathfeed.com launched today with a clickbait list titled 101 Ways To Immanentize The Eschaton (You Won’t Believe Number 57), but the site went offline moments after going live, and there are no archives or screenshots, or any other record for that matter, to prove that the list (or the site) existed.

The Elder Sign by The Kings in Yellow: A 12-inch vinyl LP stereo record in a torn paper sleeve with no album jacket. The printed center label indicates ©1987 by Primordial Stew Publishing, but no record of that company exists. Side A has four tracks: “Yellow Lovin’” (3:44), “The Stars Are All Right” (3:08), “Hellburners” (6:50), and “Streets of Fire and Blood” (7:44). Side B is a single track, “The Elder Sign” (22:39). The four Side A tracks are late-80s hair-metal songs of mediocre quality; the singer doesn’t articulate well, and the lyrics and nearly impossible to parse. The Side B track consists of 22 minutes 30 seconds of silence, followed by a 9-second dissonant chord of unknown instrumentation.

The Down Home Boiled Ham Recipe Collection
Forbidden is such a strong word. It’s not that someone is actively trying to stop anybody from reading The Down Home Boiled Ham Recipe Collection, it’s that nobody wants to. Due to improper comma placement, and a far sighted print shop manager, the 2,000,000 copies have been moving through the surplus book market like, well, like a boiled ham through a python. Enterprising used book stores have tried offering it for free, but not a single customer has ever accepted it.

Banned by the Good Neighbor’s Society of Jones Street, the Green Growers Pamphlet, or Greenies as they’re called by the kids, details the best times and dates for planting unwanted vegetable gardens, fruit trees, and other non-ornamental plant-life not approved by the local Home Owner Association. The last failure to clamp down on this forbidden ended with the Zucchini Bombing of the local parish home after an argument over who really won the local jam competition.

This unnamed folio contains the final day’s report of every vessel to sail the seas and sky. The Vasa, the Omega, the Titanic, the Columbia, the Enterprise D. Every time it’s opened to a different ship’s log- sometimes lifting the cover reveals sodden parchment, smoldering typewritten sheets, or a cracked and blistered screen with flickering text.