Are there any D&D hacks that bring it closer to PbtA?

I’m open to anything, but I wonder if there are hacks that focus on XP and equipment such that the game is more story/character driven.

Maybe, you don’t know of any hacks, but have ideas of how this could be done?

It marries the core d20/OGL mechanic with some story-game ideas and practices.

Freebooters on the Frontier?

Hi, I’m Jason Lutes. I publish stuff under the Lampblack & Brimstone moniker. My next big publishing project is Jeremy Strandberg’s Stonetop (about which I’m very excited), and after that I’ll be putting out the 2nd edition of Freebooters on the Frontier, my attempt to reimagine and improve upon the old-school fantasy campaigns of my youth. Freebooters started as a stretch goal for the kickstarter campaign I ran for The Perilous Wilds back in 2015, and the resulting 24-page booklet became my pr…

13th Age and FotF are very interesting parallels: 13th age starts with the d20/OGL mechanic and tries to pull out a lot of the complexity that bogged down D&D 3.5/Pathfinder, while putting more story-game elements into the rules.

Freebooters on the Frontier starts with PbtA core mechanic, and adds back in a lot of the crunchy complexity that a significant fraction of traditional 3.5/PF games crave.

Ultimately, the two games have a roughly-similiar level of complexity, but VERY different feel.

Then 13th Age is probably your jam.

If you are committed to using 5e for example you can go watch Adam Koebel’s Court of Swords series - likely the prep episodes would be helpful - he completely overhauled XP.

The problem is that for the most part if you are looking for character stuff to drive player engagement the system isn’t going to help you and likely will fight you.

I live in an area that was once an RPG desert, but now everyone wants play D&D, likely due to Critical Role. So, I’ve tried an Indie/Story Games meetup with mixed-ish success. Now, I want to try D&D, which I’ve actively been avoiding, and see if I could get a solid, consistent group who are willing to play a version of D&D that both satisfies me and the local locals.

I will check out that series.

@shane, are you aware of where Adam Koebel discusses the XP overhaul?

Nope. I don’t actually watch it. He has referred to it a number of times on Office Hours. And AFAIK it has happened gradually. He has to run D&D because it pays the bills. But over time he has seriously drifted it just to stay sane.

People who play D&D and do so with a focus on story and narrative and the like are doing so outside of the mechanics. They are doing it through their table’s play culture.

I found this link where he discusses it.

That said, I don’t see why one couldn’t just port over the Dungeon world XP system…

Yes, I would have a conversation with players beforehand.

From what you’ve written, it is unclear to me which aspects of DnD you want to preserve and which modifications PbtA would bring to the table that you are looking for.

Why do you avoid DnD in the first place? What is the basis for your discomfort? From the mechanics, I would like to say that 5e is very well rounded and has to offer a good experience.

On the scale of crunchy systems it is in the lower third, having Cthulhu dark on the lower end and Shadowrun or Pathfinder on the higher end.

What you get baked into the system is combat in terms of mechanics and high fantasy.

In comparison to dungeon world combat looks like a minigame within DnD but that is due to its heritage.

These are mechanical things which are IMHO essential to offer the DnD experience.

That is comparable with the core move mechanic including the typical 2d6 for PbtA. You destroy the PbtA-Experience when you start relying on skill checks.

If you want to preserve DnD you have to go with the mechanics. From my perspective Dungeon World is only part of the spirit of DnD, but represents more of what I am looking for in that type of games.

That said, what would be possible within the DnD spectrum is running the game more story focused. The prompt “What do you do” works of course as well as the concept of fronts and dangers. There are no rules for how the story changes after a skill check was made, but nobody holds you back from interpreting the result and make a soft or even a hard move - only that there is of course no concept for that, but you can look at it as a codex for the GM. You could run dungeon starters, ask questions and play more player facing.

You are free to houserule resources including gold and things your adventurers carry with them. If it makes sense they could have a rope when they need one - perhaps you play out the flashback how they prepared for such a situation. Nobody holds you back.

Omit XP and grant level ups regularly and you stop your party from pea counting and calculating through every encounter. Although this might be a hard modification for some.

Tweak initiative: play with group initiative or Greyhawk initiative etc. But in comparison to other systems combat is relatively streamlined (of course not comparable to PbtA).

Last but not least forget about alignment and CR / balancing.

I think it is easier for you to streamline the playstyle of DnD than to find a corresponding PbtA spinoff.

Dungeon World brought a lot of inspiration for DnD GMs.

Excellent. Thank you Thomas. This helps much.

Personally, DW is still too in the world of D&D for me. I would love a fantasy version of AW. I’m totally about story and character and could careless about granular combat systems. Like resolve combat in one or two roles, then see how that affects the story… But, I can’t have these things in my town. So, I’ll play D&D and see how much I can drift it.

I want an XP system that doesn’t reward combat and gold, but one that drives character choices based on their aspirations and inclinations. But, Thomas, I see what you’re saying and I will start there.

John harper’s World of Dungeons seems to be a popular alternative to dungeon world! http://www.onesevendesign.com/dw/world_of_dungeons_1979_bw.pdf

I would love a fantasy version of AW.

This is a thing: http://apocalypse-world.com/AW2ndEdFallenEmpiresPreview.pdf

I ran a Fallen Empires campaign last year and loved it.

If you want to play a story game in the vein of AW, and find DW too D&D-like, I wonder if playing D&D isn’t setting yourself up for failure. That’s pretty counterproductive!

That said, it’s always worth experimenting and trying things out.

Here are some ideas for you…

You can use any PbtA moves in D&D like so:

Whatever the players normally would roll in this situation, roll it twice.

If one succeeds and the other fails, you have a 7-9.

If both fail, you have a miss.

Corresponds relatively well to PbtA probabilities (make for competent characters, like in the +1 to +3 range).

Second, find some way to get players to engage with their characters in more dramatic ways. Over on Story Games, we nicknamed Character Traits (Flaws, bonds, etc) “BIFTs”, and some people get good story-oriented mileage out of them.

Here’s a good discussion and set of house rules for you!

First, I'll talk about my actual house rules, the hard-coded changes to the rules-as-written that I've made.

Go look soon; the forum shuts down in mid August.

The key is changing the way XP works to make it more story oriented.

However, I know a lot of people who have tried to play D&D somewhat reluctantly and sought a story game experience… and it’s usually a frustrating experience for them. Good luck! The rules linked above are good, and very thoroughly playtested.

Ben Milton had a good discussion of the 2d20 thing on his blog a while back: 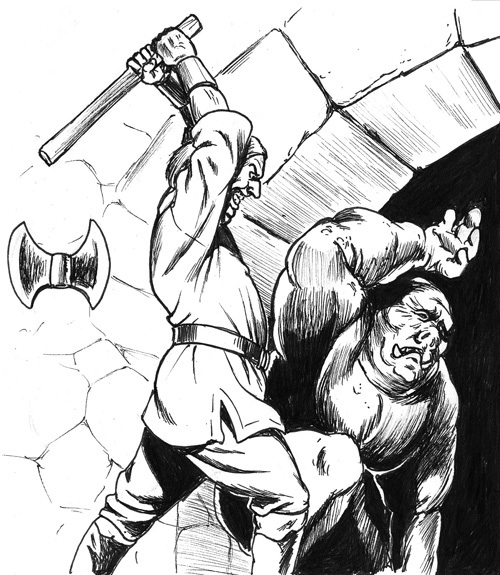 I really enjoy the way that partial successes in Apocalypse World games continually complicate the fiction. Actions scenes get richer and more interesting as problems mount; the tension builds, and players feel like there’s more thing to react...

I used the system when I ran my Welcome To Dolmenwood series using Black Hack. We used the 2d20 for everything that wasn’t combat. Worked fine.