I just now decided to take a good look at the new Delta Green and I’m really liking what I see. The only problem for me is that it seems based on a sceneario-driven ethos that is not really my thing. So, does anyone have tips for turning it into a more player-driven and sandbox affair?

As far as I remember, some character options are in powerful or knowlegeable positions in the government (e.g. intelligence services, National Security Council etc.). I’d imagine that a lot of stuff comes across their desks. They could discuss which rumours, sightings etc. to follow up on with fellow Delta Green operatives (i.e. which scenario to choose).

I’ve had fun with letting the PCs commandeer quite a few resources (organizing a state-wide manhunt, quarantining a small town etc.).

Perhaps a more “holding station” setup would be more fitting to a sandbox, like having the characters responsible for a small town or region. This could open some interesting avenues, like the buildup of their local conspiracy network with assets like safehouses, informants, green boxes, expert contacts, etc. through actual play or downtime between “operations”.

I’m considering also taking ideas from Apocalypse World and having a 1st session where the group defines how they came together, what their drives are, and what Threats/fronts are there in the region (with or without the setting canon enemies). Then the GM puts some clocks on those threats, a small conspiracy network for each representing their tentacles in local business/govnmt, and have the players go after whatever they want. This could be interspersed with “monster of the week” sessions unrelated to those threats, and even “personal arcs” sessions for variation.

Eventually the characters would die or quit service out of stress, at which point the goal is to train their successors so the player can “retire the previous character to safety” and start with a new recruit.

I would strongly advise looking into Conspiracy-X game for inspiration. There is mechanic there for obtaining base & resources (pulling strings, which allowed you to have specific things happen in game world - closest thing to moves I saw in older trad games), which is probably much more AW style approach, then basic mission oriented Delta Green. I think doing something similar in DG setting could greatly increase players agency, and let them play in more AW - sandboxy style.

Thanks, I’m looking at Con-X right now and will totally steal those ideas!

BTW, I’ve just finished some DG playbooks to use with my group. If anyone want to take a look, they’re here:

The idea is having a superfast chargen. You just pick a playbook, fill spaces and allocate 20 pts in 3 skills (or a combination thereof). Skills and stats arrays varies for each group (more generalist for the agents, more focused for the specialists), as per the guidelines in the Agents’s Handbook. The agencies stamps are temporary, I think I’ll ditch them later.

Any feedback or ideas are welcome.

(next I’ll be doing a “Cell sheet” - ala Blades in the Dark - to track stuff like exposure, conspiracy assets, current cases, etc. in sandbox fashion.)

What do you want to accomplish with the sandbox? A world that is larger than the characters?

I have written two articles about how to create intrigues or mysteries using mind maps. Perhaps those could be of usage:

The Fish Tank as an Intrigue

Today’s guest article by Gnome Stew reader Rickard Elimää is a follow-up to his previous piece on the Stew, The Fish Tank as a Mystery. Thanks, Rickard! Imagine the characters being fishes. Throw them into a fish tank filled with piranhas, lean back... 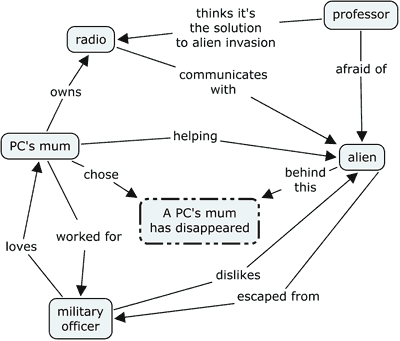 The Fish Tank as a Mystery

Today's guest article is by Gnome Stew reader Rickard Elimää, and it details a fantastic technique for GMs: the 'fish tank' model for creating a mystery adventure. Thanks, Rickard! Why is a mystery like a fish tank? Imagine a fish tank with some...

Amazing articles, @Rickard . I think I’ll have to digest them and train some fish tanks of my own to test it.

I’m thinking of 2 ways to use your technique: 1. to create “monster of the week” single-session scenarios, and 2. to create “relations” (to use your jargon) between adventures forming a bigger whole.

So, maybe that Byakhee that appeared out of nowhere and was killed by the players back in first session, is revealed four sessions ahead to have been summoned by Marsh Industries as part of their experiments on anomalous materials, and now the group may pursue the goal of jeopardizing Marsh Industries operations (optionally of course, they can simply ignore it and seek another target if they find the faction too big for them).

The only thing I think is needed for this sandbox to work, is that I would need to start from “top to bottom”, that is, drawing the big players in the scenario and their agendas (like Marsh Industries) first, and then descend into minor fish-tanks of occurences/incidents related to those.

The only thing I think is needed for this sandbox to work, is that I would need to start from “top to bottom”, that is, drawing the big players in the scenario and their agendas (like Marsh Industries) first, and then descend into minor fish-tanks of occurences/incidents related to those.

You could do that, creating a fish tank that branches out into smaller fish tanks. It helps when improvising - when you have the full picture in mind.

I usually go the other way, to create an initial smaller fish tank (5-7 factions), play it out and then use some of the factions to create another fish tank, mixed with new factions, based on the events on the previous session. It doesn’t take as much time and thought.

The other game that has moved to a sandbox model is Unknown Armies. It has a lot of notes on how to setup the game collaboratively.

Basically a framework to play Delta Green sandbox style, taking some notes from other games. It uses default Delta Green rules, with some small tweaks here and there to fit the sandbox premise (eg: don’t need to roll in downtime, just pick options with bonuses and maluses - I find this fits better the strategical framework, than rolling with a chance of failing and wasting a precious downtime action). The GM kickstarts the game by announcing a couple unnatural incidents and leave it to the players to pursue them however they wish.

Later I’ll finish that “Conspiracy sheet”. It’s for the GM to build a couple conspiracy pyramids where those incidents cited above are just the tip of the iceberg.

Not playtested yet. Will do it soon. Any feedback is welcome.

This looks absolutely awesome. I really like the Blades-style faction map and standardized downtime actions. I think it would work well with The Labyrinth sourcebook. Please share the conspiracy sheet when it’s done!

It’s super cool.
My negativity bias tried to tell me something about therapy, like “It’s not advisable to suggest that alcool is good for mental health” but, hey, this is your game, you know what you’re doing.

Conspiracy sheet is ready. It’s for the GM. Take a look at the previous link.

@Alexi_Sarge’s Checkpoint Midnight has a mechanic to pit the Great Powers against each other to let an operative retire to safety. That might be something that could offer an idea of how it could work in Delta Green.

What program did you use to make this and are you comfortable with sharing source files so people can swap out the maps and other things that may fit their campaign better?