Discussing Vessel of The Garbage God

I just released a game and I would love to discuss it with people. It’s available in pay what you want from Itch.io here. 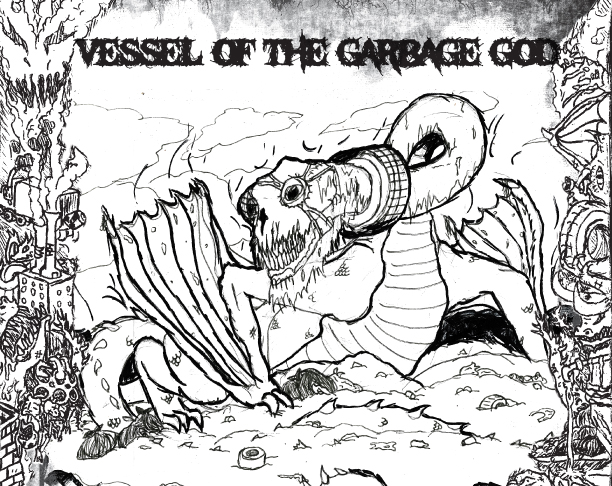 It’s sort of a call to action game that tries to get people to pick up trash from houseless camps. It also asks you to imagine you’re being possessed by an Elder god of Garbage. So I guess it’s a LARP?

It was released as a bonus game alongside Jeeyon Shim and Jason Morningstar’s compilation TRASHPLAY, on the Bully Pulpit Games Patreon.

I would really love to hear what people think of it in more detail. Feel free to ask me anything about the game or myself too. Thanks!

Hi there, @OrionCanning. Vessel of the Garbage God is a really cool project!

I’d love to learn more about the design process. What was designing the game in alliance with Just Housing Olympia like? Did people in the organization offer input into the design as it took shape?

I’m also curious to hear about the connections you see between activism and play. This feels like a game that wants to challenge our notions of what play is. It left me asking what play can add to activism, and what can activism add to play?

I’ve been volunteering with Just Housing Olympia off and on over the past two years. I made a short video with them, I speak at city council when they vote on issues related to the houseless community, and for a while I regularly went to pick up trash from houseless camps, which is a service they organize weekly. I wrote the game based on those experiences and then emailed the game to a mailing list that goes out to all the members, asking for their feedback and if they would like to be associated with the game. I got enthusiastic support from everyone who replied, as a group we hoped it would bring more attention and support to the organization. They asked me to include the website, sent me a copy of the logo, and wrote up a short description of what the organization does.

I also spoke with one of my friends Robert who is more heavily involved in organizing, including being a lead organizer of the trash pickup program. He also did the editing on the game…I was concerned the game as it was might irresponsibly send people out into an unsafe situation with too much whimsy, while there’s some serious safety concerns to consider, both on the part of camp residents and activists. I asked what advice he would give on how to pick up trash safely, and how he approaches camp residents when offering trash pickup to a new camp. Most of the input I got from him went directly into the sections “On safety” and “On Respect”.

I definitely think a lot about how games can make the world a better place. If you look at my online presence you’ll generally see me talking about two things, politics and game design. And just like any other form of writing or art games are a way to spread political ideas. But the thing about writing game rules that makes it different is you are prescribing a list of actions to the players.

The definition of Game is itself kind of hazy, right? In recent times the commercialization of games has led to this idea that the list of what players are asked to do is confined to interacting with the elements and game pieces that come with the game rules in a box you purchase. But there’s an older definition of game that has more to do with prescribing real world interaction, like baseball, or ring around the rosie, or tag. These games tell you to physically run around and touch each other, even tackle other people.

So if you think about it the possibility space for what a game can tell you to do is wide open. In some ways there’s really not much differentiating game rules from, say, any social contract. Like the rules you agree to when you get hired for a job, or if you join the military, or if you become a lawyer. These rules were all written by people and often rely on people agreeing to adhere to some arbitrary behaviors, just like in games. Hold hands and run in a circle, hold guns and shoot at each other, etcetera.

There’s no reason game design can’t be used to guide people towards positive behavior that creates some kind of social good. LARP is this powerful technology of combining fiction with rules, combining acting with mechanics and prescribed actions. Again that’s not all that removed from using propaganda to convince people to do what you want, the main difference is with one you convince people to believe something, the other you tell a story that people pretend to believe for an agreed period of time.

Well, obviously an even bigger difference is in good game design you are attempting to make the game fun for everyone, and fun is the intention instead of manipulating people to gain power. And although you can surely design a game that’s only fun for one player in the end (like monopoly) I think that can widely be agreed on to be bad game design. I think that difference is actually a deep philosophical one, it’s the difference between wanting the most good for everyone, not just the most good for one person, or the people who come out on top. This desire to “win” a competition, instead of to collaborate, these separate approaches can be applied to games and life.

I’m probably totally rambling, but yeah, I think if the concepts behind good game design are applied to the rules we live life by, we can create a better world for everyone. And in this particular case it’s a matter of using this fiction to motivate ourselves to do good and make the process of doing that more fun.

Honestly I don’t know if anyone will actually play this game, but that’s less important to me than to get the underlying ideas out, the idea that as a society we enjoy a service that is denied to the homeless, and then used against the homeless as rhetoric to deny them more services. Which is obviously complete bullshit. And then also the idea that where society or the government fails, we can organize to do the things that need to get done and help the less fortunate and one another.

So yeah I would love to see more games that serve as a call to action, but also find ways to make it easier and more fun to get involved, or at least make it more fun to read about. I’m really glad you’re asking those questions, what play can add to activism, and what can activism add to play, those are amazing questions! I think there’s a lot of possibility there and I’m excited to see someone find the sweet spot that helps create a real movement!

This game promises to be awesome ! Be careful to transform after getting off your vehicle so you don’t damage it.