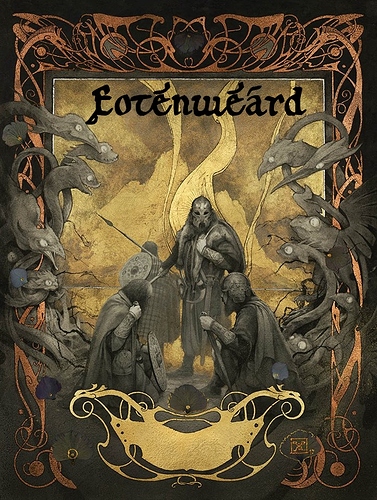 AR&#39;s Eotenweard Gauntlet AP Video Thumbnail724×960 286 KB
Lowell Francis will be a guest in this series.
Concept: This is a gritty, low fantasy, ‘historical’, game set in Britain 200 years after the Roman legions withdrew and at least 200 years before the ‘Age of Vikings’, as portrayed in the BBC’s ‘Last Kingdom’ and Prime’s ‘Vikings’, though they remain effective tochstones.
The supernatural world is very real to people, whether they see it through the Christian lens of the indigenoue Celtic peoples or through the pagan gods of the Anglo-Saxon rulers of much of South and East Britain (Woden, Thunir, Frig, Tir and the rest of the gang that will, one day, fuel a Marvel franchise). Meanwhile, some cling to the Old Gods of the pre-Roman Celtic religion. It is a world where honour is highly valued and where obligations to secular and supernatural powers can be complex and sometimes competing.
The playbooks available in this game are: the Commoner ; the Hammer of the Gods ; the Loon ; the Monster Hunter , the Outlaw ; the Pagan Mystic ; the Priest of God ; the Scholar ; and the Warrior of God . There are also 5 Monstrous playbooks only one of which can be in play at any one time: the Demon , the Fae Changeling , the Revenant , the Skinchanger , and the Spirit .
Aim: The Eorl of Synhamm has received reports of something terrorising the villages across the river, deep in the Great Mire …
Will your band of characters take Fate by the throat and make their own Destiny? Will they step into the Dark and bring the Light? Will they Forge their reputation with Blood and Iron?
Tone: Set in a Dark Age where the supernatural is a fact of life, and life itself is very cheap, the game is intended to be rich in darkness and foreboding. How dark may depend on how the players approach the game …
Subject Matter: Adult and occult horror themes may be encountered so we’ll be careful to use the safety tools espoused by the Gauntlet Community:
LINES: My starting lines, which we will not see in the fiction, are Sexual Violence & Violence against Children … though given the setting, we may see the implied threat of these, or their consequences …
VEILS: My starting veils, which may occur in the fiction, though at that point we will fade to black, are Sex & Torture .
Players will have an opportunity to add to these Lines or Veils at the start of the session.
THE X-CARD will also be in use, as will the Gauntlet Code of Conduct (https://www.gauntlet-rpg.com/community-code-of-conduct.html), and we’ll be running with a Open Door.
Alun_R September 14, 2020, 3:14pm #2

Eotenweard - The Great Mire (1/4)
Travelling to a meeting with Hoel the Monster Hunter at Synhamm, ‘Black Russel’ the Outlaw, his cousin Cunobacha the Pagan Mystic, & Icenius the Frankish Sword of God break their journey at Danum. An unfortunate series of events ensues … then there is a warband, a raid, a box … and a skinchanger …

Eotenweard - The Great Mire (2/4)
‘Black Russel’ the Outlaw, Cunobacha the Pagan Mystic & Icenius the Frankish Sword of God catch up with Hoel the Monster Hunter, and together they discover what is in the casket they saved from the skinchanger at the end of session 1. Then they introduce themselves to Widuc, Eorl of Synhamm, and his advisors and there is a costly confession, an opportunity for gain, a difficult meeting with some marsh men, the power of Nodens … and then … a head … and some spine …

Eotenweard - The Great Mire (3/4)
Hoel the Monster Hunter and ‘Black Russel’ the Outlaw implement a cunning plan to turn a prisoner into a guide. Later, Icenius, the Frankish Sword of God, allows pride to lead him to a fall and it is Cunobacha the Pagan Mystic who finds a way to do what they came for, and not get their heads torn off … and then … there’s a giant serpentine fish, a vision of the past, silver bracelets, and a mosaic that shows the way … they hope …