Examples of self-published RPGs that are well designed, laid out or formatted?

I’m looking to throw together a short RPG (no itnent to print it, mostly will be used by me and my friends), but I don’t know anything about design, layout, font-choices etc…

Anyone got any homemade examples that look nice that I could take a look at?

If you aren’t going to publish it, if it is just to be used by you and your friends, then you don’t need to worry about it having impressive layout and visual design. Seriously don’t make the task any hard than it has to be: make the best game you can, without worrying about how it looks. Visual appeal is a tool for convincing strangers to play your game, and that is not your problem.

If you are still worried about your game’s appearance, the best strategy is to ignore other games and just look to good examples of graphic design in general. For a short and easy start, try reading the Non-Designer’s Design Book by Robin Williams (not that Robin Williams).

Mausritter is perhaps the nicest-looking indie RPG I’ve ever seen. 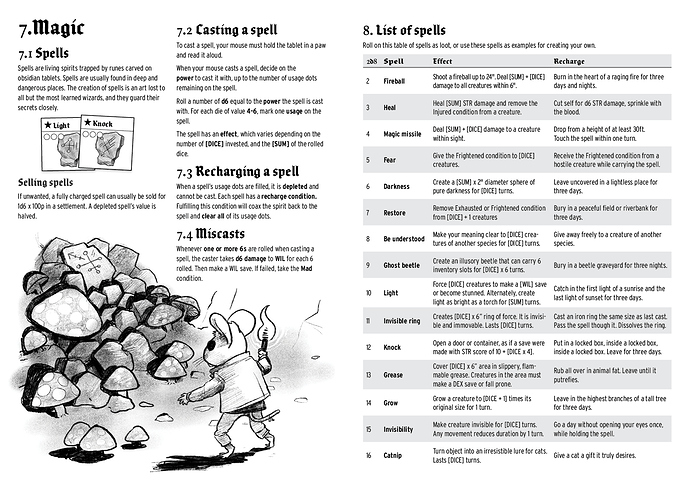 Agree with @yochaigal - Mausritter is laid out nicely. In terms of B&W clean design a lot of OSR stuff is pretty god - Maze Rats, Rakehell - Issue One. I like the layout of The Stolen City, Rebel Crown, and Beak, Feather, & Bone as well. In terms of more fancy designs Mothership and Dead Halt are pretty well designed as well (Mothership is especially great with visualizing important relationships).

I believe John Harper did the design and layout of most (all?) of his games himself, and they’re masterful. Lady Blackbird and World of Dungeons are small gems (both available as free PDFs); Blades in the Dark and Agon are book-length.

Maze Rats was self published by Ben from Questing Beast.

Into the Odd was done by Chris McDowall of Electric Bastionland fame.

Someone already mentioned John Harper who I think is a graphic designer in his other life. So that means World of Dungeons, Lasers & Feelings, Lady Blackbird, Agon, Blades in the Dark, Ghost/Echo, Ghost Lines, The Mustang.

Index Card RPG by Brandish Gilhelm (they go by Runehammer I believe).

Dave Cox who did A Rasp of Sand.

I don’t think Esoteric Enterprises is self published but Emmy Allen wrote and laid it out on her own.

I probably have more, but that’s all I can think of.

Ha, I love seeing @Nickwedig downplaying the importance of visual design when World of Secrets is one of the first to come to mind for me. Others include Offworlders, Pacts and Blades, Stars Without Number, everything by Sword Queen Games, aaaaand I could be at this awhile so I’ll stop there for now.

I’m not downplaying the importance of good graphic design, I am just saying that it is complicated and it takes time and effort to do well. The OP doesn’t need to take on a whole new hobby just to enjoy the their game with their friends.

Oh, apologies, I know, was just trying to gently poke fun. Love the design of that little game, and also your Kingfisher one-page scenario.

(Also apologies for the accidental double post that is badly confusing the forum.)

It’s cool. Nothing to apologize for. I just wanted to clarify what I was saying.

And thank you for saying nice things about my game. 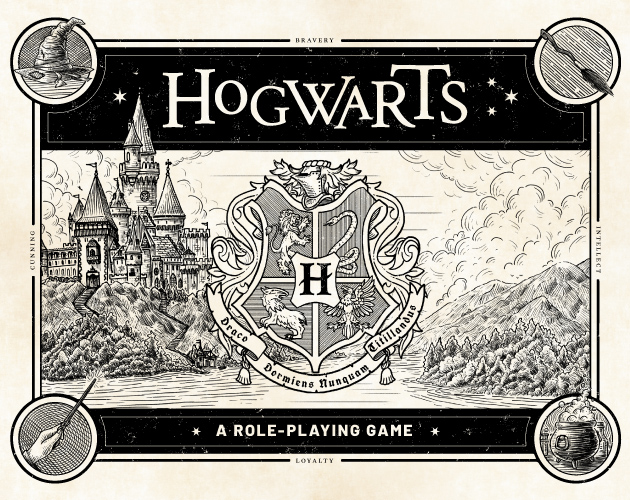 Hogwarts: An RPG by David Brunell-Brutman

this is a really nice graphic designed rule book.

ETA: I’m also currently running this game and it’s been quite fun.

Hogwarts is so gorgeous that it literally makes me despair of getting my own work to look even ok. x.x

Avery Alder’s MonsterHearts and The Quiet Year have impressive visual design (as well as game design!)

A lot of recommendations here are things I wouldn’t typically think of as “homemade”, but they are all great looking work.

I’ve recently been impressed with The Wildsea and I think Mörk Borg is really interesting. I also think there’s a lot to be learned from Quest.

It’s hard to say how attainable any of that is. I don’t think I’ll ever have the skills to make a character sheet like Mothership’s. I’ve probably learned the most from simple tutorials on youtube.

Listen to me: you’re looking for Dialect by Thorny Games. 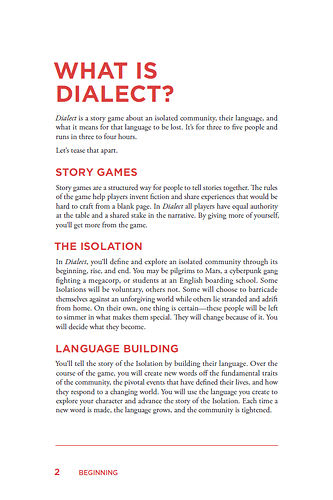 Might be a bit gauche to nominate oneself but I am pretty pleased with the layout of my own little one-page RPG, Messerspiel.

You could also start by learning the basics in typography.

I’ve written a a few guidelines for beginners.

The thing that costs, both in money and energy, is using and learning a decent enough layout program.