Games with a dice qualititive element

Hello everybody,
I’m looking for games with a dice qualitative element.
What I mean as a „qualitative”?
In traditional games, when you roll the dice, you want to answer the question „does my character succeed in doing their task”. Sometimes, when you roll particular result, you have extraordinary success, great defeat. In Numenera, when you roll „1”, Game Master introduces free GM’s intrusion.

But I’m looking for games, in which a specific result adds something in the fiction, independently of Game Master and players.
Something like fate cards in Archipelago - „Yes, but you earn a new enemy”.
Or like „Alone in the Stars”, where a specific card tells you what happened.

Can you recommend me any titles?

Currently playing Alien where the face-hugger result triggers a panic roll that can really mess with the narrative . Is that the kind of thing you mean?

(encounters, random generators, crit tables, etc.)
In Nomine has 111 and 666 invoke gods.
Many PbtA moves, most notably perception moves (seclusium of Orphone style) have prompts to introduce content.
But then… there’s a whole spectrum of introducing content. In a way, anything where you narrate after the roll (reaction roll), and chiefly Fortune in the Middle rolls (@Rickard … what’s the name for it again ?)
It looks like you want to unload the burden on players for content generation. And you’re ready to go with Tarot procedure : general prompts that players paint by numbers. Descended for the Queen games. Prompt, a RPG. Then the number of “categories” you are going to play with is critical for the precision/replay value balance. Good / bad doesn’t satisfy you. Can you give us a range ?

And of course, Otherkind dice when you keep track of where dice come from and go to : that informs quite precisely what is happening. Star Wars So and So the RPG is a limited version of that with proprietary dice.

But it’s a mechanism - „roll in the specific situation, to get an answer”, and it’s a base for many PBTA moves.

But I’m looking for a mechanisms that allow players (or GM) to add unplanned element on any roll they make to perform an action in fiction.

Adding content according to success is the unspoken rule behind FitE rolls (notably “spicy dice” play), and a feature of FitM.

You don’t want to have it on a regular basis as in Otherkind (tracking dice variant), then limit it with, say Fate points (which is how I would do it).
You want it to be

Another solution to assess would be content invoked through stats and stakes, like in Jacob Randolph’s Law’s out ?

Personnaly, I’d insist for the randomness to be tempered by an (advantage) token mechanism, such as Technoir’s Push dice.

The 2017 (Mongoose) edition of Paranoia adds a special die to every die pool where if you roll a certain result, it means the Computer involves itself in the situation, but how it involves itself is basically up to the GM.

Is that the kind of thing you’re looking for, or no? It feels similar to the Numenera GM Intrusion (and I’d think the same about the In Nomine special rolls, too, for example), but the original question made it sound like a GM Intrusion is not an example of what you’re talking about? Is that right?

Thank you for your recommendation, I’ll surely check this titles.

@flatvurm - GM’s Intrusion is not an example, because it happens as a ‘supplement’ to basic roll, not as a rule, but that kind of mechanisms are very useful to what I’m thinking about, so thank you for idea to looking back to Paranoia : )

Swords Without Master shifts the traditional narrative of die rolls, where success/failure is secondary to the roll. You roll two dice, each associated with a tone, and the higher die determines the tone of whatever you do. Most of the time, you also have say over how successful the action is–but most actions don’t even think about that dichotomy, instead it’s focused on the expression of your action, and most actions you take don’t fall cleanly into either success or failure.

it’s not dice but I think I got what you are looking for: “the clay that woke” has players picking tokens from a bag to solve situations. Different token patterns suggest different solutions. 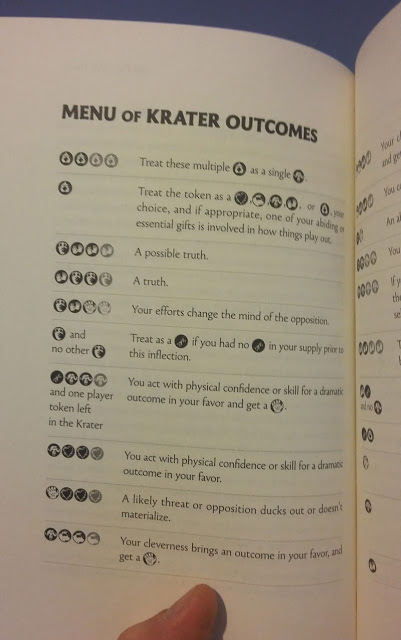 But then… there’s a whole spectrum of introducing content. In a way, anything where you narrate after the roll (reaction roll), and chiefly Fortune in the Middle rolls (@Rickard … what’s the name for it again ?)

I kind of stopped using “Fortune in the Middle” because it didn’t mean what I think it meant.

Anyway. Rory’s Story Cubes and the card game Once Upon a Time both fit your description. In Dungeons and Bananas, you roll a trouble die with your roll, and the number or “bad outcomes” and said trouble die generates a consequence from a table.

In my game Battlestreets, players make all the rolls, but if they fail and/or roll any 1s in their dice pool, these count as Openings in which the villains strike back and/or something bad happens. It started as a way an effort to be GMless (or to give guidence to the GM) but ended up being an interesting dynamic because the more players push themselves (choosing bigger dice pools) the more opportunities for Openings occur.

We also got Zombie Cinema, which have a game board where the zombies move towards the characters (in the story and physically on the board), when certain conditions are met.

Kagematsu has a list of scenes that the players suggests to the game master to play out with their character. A Quiet Year does something similar with cards that the active participant draws when “framing a scene”.

Yesterday watching the Critter Hug they spotlighted the game JiangShi where if you roll a 4 (unlucky number in Chinese mythology I guess) on a 1d4, you cancel out any critical hits you might otherwise roll (on a 1d8 if I understand correctly, because an 8 is a lucky number? Haven’t actually played the game so I don’t know the mechanics but you might want to take a look for that: https://www.youtube.com/watch?v=C-sQuVbSVPQ 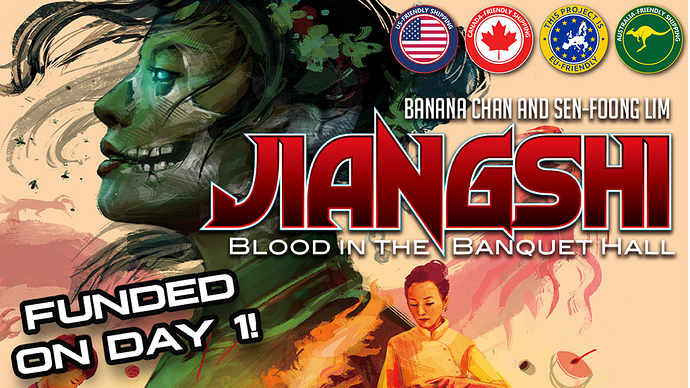 Pre-order Jiangshi: Blood in the Banquet Hall on BackerKit

An RPG of Chinese immigrants running the family restaurant by day, and dealing with the hauntings of Jiangshi by night!

ok, I have this idea… you roll a set number of dice, let’s say 4 or 5 dice. And the dice have either pips or more evocative symbols on their sides.

Each “move” that requires rolling the dice (let’s say for physical, mental and social risk) has a lookup table where different combos of symbols give different qualitative results. You can roll the dice, keep some and roll again. The number of rerolls could depend from skill or difficulty.

The different patterns, with different qualitative results, would overlap a lot creating a set of interesting tradeoffs between keeping some results or rerolling to get more.

That sounds a lot like The Clay that Woke (which you linked to above).

Or do you some different implementation?

I was basically thinking Clay that Woke with dice, also allowing you to keep some symbols and reroll others, trying to go for specific patterns, which I am not sure if it can be done in CtW

The different patterns, with different qualitative results, would overlap a lot creating a set of interesting tradeoffs between keeping some results or rerolling to get more.

That also sounds like the Genesys systems. I love Star Wars games (who doesn’t?!) but the system with all their funny dice just was a non-starter for me.
Although, your idea now gives me visions of drawing strange runes on my dice by connecting the pips, and that makes me want to reach for my sharpie LOL

The symbols/runes could be thematic for the world (law vs chaos, specific gods or themes), the campaign or even the individual story… allowing you to skew the narrative choices for individual sessions or characters. Maybe you unlock special symbols on the dice later on in the story… there seem to be quite a bit of design space that can be explored.

I don’t know Genesys at all. Can you tell me about what they do that?