NEW (to me at least) MEMBER INITIATIVE: PLEASE DO NOT SIGN UP FOR THE FIRST 72 HOURS IF YOU HAVE ALREADY PLAYED IN ONE OF MY SESSIONS THIS YEAR.
ALL ACCESS DATE: 5 OCTOBER 2020
This is a 2-shot playtest of my light hack of our own Rich Roger’s game of street level supers, Hit the Street - Defend the Block .
In this game superpowers are replaced by being an awesome example of a pulp stereotype, while Hit the Street’s unique Neighbourhood Building is replaced by co-creation of locales where our Pulp heroes will confront their Nazi nemeses. Play will begin, as is only proper, in that beacon of 1930’s Democracy … New Gauntlet City …
Sessions will be on the middle Sundays in December at 2pm (GMT): 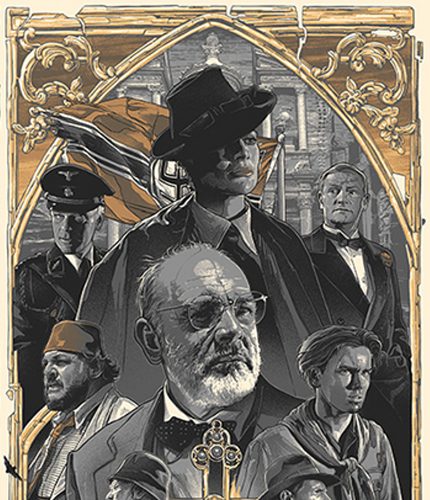 Gauntlet Comics - Hit the Nazi : Retrieve the Ark (1/2)
It’s 1935 and Rosy Strand, Ace Reporter, joins her friend Diana Darling (alias Masked Vigilante, Ms Fortune) at the shady Star Nightclub for a rare performance by Mr Midnight, the famed Stage Magician & Mesmerist. “Rocky” Rockwell the brawny Inventor comes along as Miss Strang’s protector. There’s an out of town torpedo, a complex mechanical device, and a thwarted kidnap … then … a complex family relationship is revealed and a kidnap happens anyway … Democracy is still at risk … until next time, at least …

Gauntlet Comics - Hit the Nazi : Retrieve the Ark (2/2)
It’s still 1935 and our heroes pursue their clues to the fate of Professor Haas, by airship, to the high plateau of central Asia, where the Nazis are rumoured to be ‘building something’.
There, Rosy Strand, Ace Reporter, gets some fantastic photographs as Ms Fortune, the Masked Vigilante, drives off an attack by Nazi fighters, before Mr Midnight, the famed Stage Magician and “Rocky” Rockwell the brawny Inventor combine their talents to disguise the airship as a cloud and hide it in a deep canyon. After that, there’s an old nemesis in a fancy car, an old ally on a camel, and a wager … then … there’s a secret Nazi base, a wild-eyed Sorcerer, and a direct threat to New Gauntlet City, the home of Democracy … and finally … a lost lover is revealed to be … ‘Die Rhinemaiden’!