I made a flowchart outlining the moment-to-moment procedures that pace a session of Goblinville. I was inspired by John Harper’s diagram showing “what you actually do in World of Dungeons” and @Jeremy_Strandberg’s Framework for GMing Dungeon World. 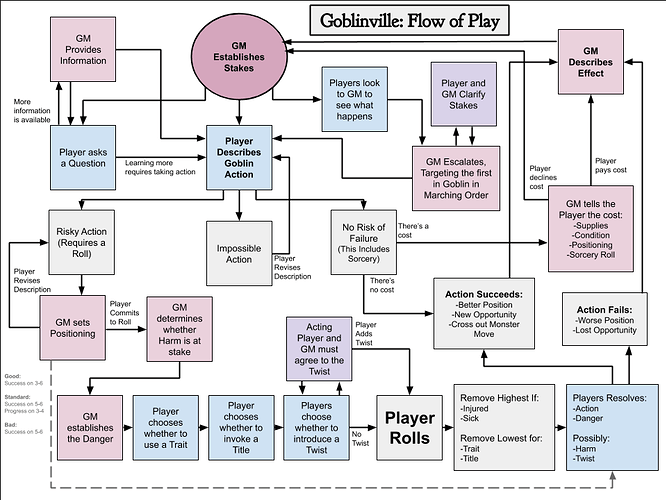 I think something like this would be really useful for learning new systems and might reveal surprising similarities and differences among systems. For example, I imagine different PbtA games have very different flows, even when their systems share a lot of elements (2d6+stat, playbook moves, etc).

I’d be curious to hear what people think of this kind of information design as it relates to RPGs.

That is a seriously well thought-out flowchart - one of the best of this sort I’ve seen. Nice work!

Diagramming RPGs this way, either from a play flow perspective (as you have done here, with each “box” referring to a game-significant decision or someone saying something out loud) or from a design perspective (showing then function of rules and currencies, as Ron Edwards has done in the past) can be a tremendously useful exercise as well as a great resource.

This one is particularly good!

One question: Is it intentional that the “Player declines cost” arrow points to “GM Targets first in Marching Order” rather than “GM Establishes Stakes”? It seems counter-intuitive to me, but I haven’t read the rules yet.

Here’s the passage on Marching Order: 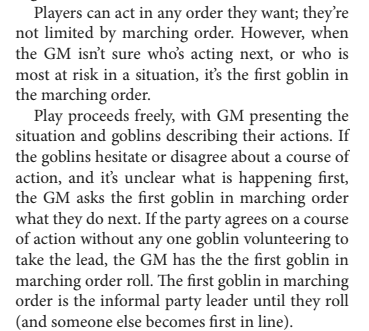 Let’s say the GM tells the player the consequence of their action “If you climb into the nest of the ghost crows, you’ll be in a bad position. Their call rattles around in your head and throws off your balance”.

The player declines: they’re curious about the contents of the nest, but not that curious.

The stakes are unchanged and the GM doesn’t have to establish a new situation, which is why I initially said that the next step is the GM addressing the first goblin in marching order; that tends to keep the momentum up much more than directing the question at the whole table. However, that’s a practice rather than a procedure (if the situation remains unchanged, don’t wait as long before you escalate).

Sometimes players will have a question right away or will jump right into an alternate action. If so, the GM shouldn’t cut them off. I’m editing the diagram now. Thanks!

When I was designing Goblinville I thought a lot about the ways in which it was influenced by PbtA design. We don’t pitch it as a PbtA game (as this would generate inaccurate expectations) but we acknowledge the influence of PbtA in the text.

Looking at this diagram makes this influence a lot more overt to me. There are several ‘moves’ baked into the procedures, even if they aren’t called that:

I’m sure there are others in there. A lot of these procedures are common across rpg systems, but the way that PbtA explicitly designs for momentum had a strong influence on Goblinville.

I commented on Twitter, but this is a better venue for detailed discussion. Great chart!

I like to consider two audiences: for the designer, this is an analysis tool. One, it helps you check for consistency. Two, it is a measure of complexity.

For a player, it supports the communication of the rules. Creating flowcharts for players requires some user experience effort and graphic design. So, it’s more costly and has to be weighed against other priorities.