How to create solid plot/npc “webs”?

I’m the forever GM in my crew and one of my weak points with GMing is creating solid background “webs” tying together NPCs and “Plots”. My crew and I are about to start a game of Nahual, but really this is useful for lots of games, PBTA or otherwise. Obviously, I’ll be waiting until our session zero to see what the PCs bring to the table as far as NPCs and background issues. I get the concept about not creating my own story to impose on the game and instead playing to find out what happens. Where I fall down is after the session zero.

I struggle to tie the NPCs and situation together into a web of problems and situations to challenge the PCs, especially in a long-term sense. This is partly a creativity deficit on my part, but maybe I’m missing some useful technique or skill here?

Can you suggest any resources to help me improve? Articles, videos, tools, examples?

I’ve written two articles about the fish tank structure, where you tie a bunch of factions together with relations. Whenever the players “pull” in one of the factions, it will draw the attention from others via the relations. 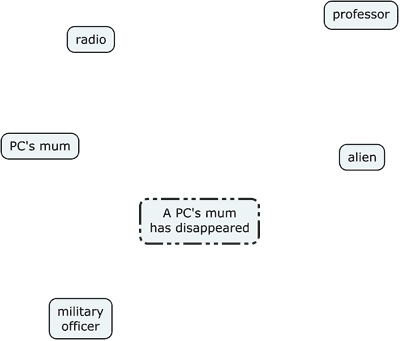 The Fish Tank as a Mystery

Today's guest article is by Gnome Stew reader Rickard Elimää, and it details a fantastic technique for GMs: the "fish tank" model for creating a mystery adventure. Thanks, Rickard! Why is a mystery like a fish tank? Imagine a fish tank with some...

The Fish Tank as an Intrigue

Today’s guest article by Gnome Stew reader Rickard ElimÃ¤Ã¤ is a follow-up to his previous piece on the Stew, The Fish Tank as a Mystery. Thanks, Rickard! Imagine the characters being fishes. Throw them into a fish tank filled with piranhas, lean...

I’ve even turned this structure into a game, where you play out the revelation scene in a typical murder mystery movie. You can solo play that game, and get a mystery to play with an ordinary game.

The Murder of Mr. Crow

Whenever I create factions, I tend to see what kind of flags the players created for me through their characters: backgrounds, skills, connections, family or whatever. That will color whatever I will come up with on the relationship map that contains all the factions and their relations. It takes about 45 minutes for me to create a web of intrigues, which will give enough fuel for 1-3 sessions.

Yes.
Also, Technoir transmission, instant blorb or any other relationship map building tool, like Fractal https://itch.io/jam/fractal-jam or Apocalypse World. One thing though: I suggest to reincorporate heavily unless you want to invoke a conspiracy of galactic dimensions. Tools like relationship maps, minis or paper standees, faction status (BitD) and faction turns can help but anything above 6 units is too much for me to handle.

But maybe a simple trick would be to transition each character from one character arc into another, having prepared a few simple possible directions you think the character concept is begging to explore. This way “background issues” are like character issues materialized when the opportunity presents itself.

I wouldn’t know, I only play GMless one-shots.

One of my favorite system-neutral tools for this kind of thing is Backstory Cards (Galileo Games). The product itself is built to be somewhat generic, so it may need some massaging for a game like Nahual which has such a specific setting and lore, but I like the technique the cards employ, and regardless of setting, it would still be a nice way to generate some general ideas for a web.

The cards themselves are prompts…questions about a character’s history posed in a fill-in-the-blank format, and the blanks can be PCs, NPCs, Groups, Places, or Events. As prompts are drawn, items to fill in the blanks are created and recorded on a chart, but only a limited number of items are allowed (plus the selection of items can be randomized), so as the number of prompts grows, the items are re-used for different prompts. In this way, PC Alice could have met PC Bob through Group Alpha, which was responsible for Event One, which was a turning point in PC Charlie’s life, etc.

The product is designed primarily to create an interconnected history for the characters so that at game start, the characters have some established relationships and group dynamics. What it also generates, though, is a ready-made web of related setting items with plot hooks and relevance to the PCs all ready to go. Creating future situations for the players to encounter just involves looking at what has happened already and asking yourself about the consequences. Since Group Alpha was responsible for Event One, how did they react to the PC’s involvement in Event One? Their next move will involve Location Zed, which is important to NPC Lily, who knows PC Alice…and so on.

One site that might prove helpful is Story Grid. While the format is primarily designed for novelists and editors, the information is incredibly helpful for GM’s.

The Story Grid is a system for nailing down your genre and integrating said genre’s character needs/values, obligatory scenes, and necessary characters. For example, check out their blog post on the Horror genre vs the Thriller genre.

What you want to do is to lay out your NPCs and factions, as created from your Session Zero (or wherever, so long as the players are involved and care about these elements).

Don’t stop until each one is connected to two others, and in serious conflict with at least one other.

While doing this, also create some PC-NPC-PC triangles. Make it messy this way: that person is your mentor? Ok, well, they are also the murderer this other character has been searching for.

It depends a fair bit on the game, its needs, genre, style, and so on, of course. But beyond that there are many tools, as well. Rickard’s articles, above, are also fabulous.

This was my own attempt at a really simple and dirty, quick method for Apocalypse World:

This is a tool I put together for Apocalypse World; it can help a group get to the “action” very quickly. Taking the premise that the central conceit of each playbook + PC-NPC-PC triangles basically make the game work, this gives you a small set of NPCs with actionable and interesting relationships to the PCs. The players get to define who the NPCs are and why they are important to them, which means the MC just needs to “put flesh on that skeleton” with evocative character descriptions/depiction…

You can probably easily imagine doing this on the fly, if you have creative players, without having prepared the list beforehand (and that could be even better).

The main thing to look for is instability. Things that are about to move, topple, or explode.

“These two are married” does little on its own, until it’s combined with other things.

“My lover is married to your enemy” -> that’s juicy.

So is “these two are married. One is cheating on the other, though, and the other doesn’t know yet but has hired NPC X to follow them around. Sooner rather than later, it will all fall apart.”