I’m going for a mix between Tonio Trendy from JoJo part 4 and Quina from Final Fantasy 9. Also, I tried to make the Gourmand’s moves kind of a quest of their own, with them always looking for superior monster meat or greater stranger Gourmands to learn from.

I can’t look at this right now because work has blocked Google Drive (grrr) but I’m surprised to report that this isn’t the first “cook” playbook I’ve seen for Dungeon World, since there’s also this one here: 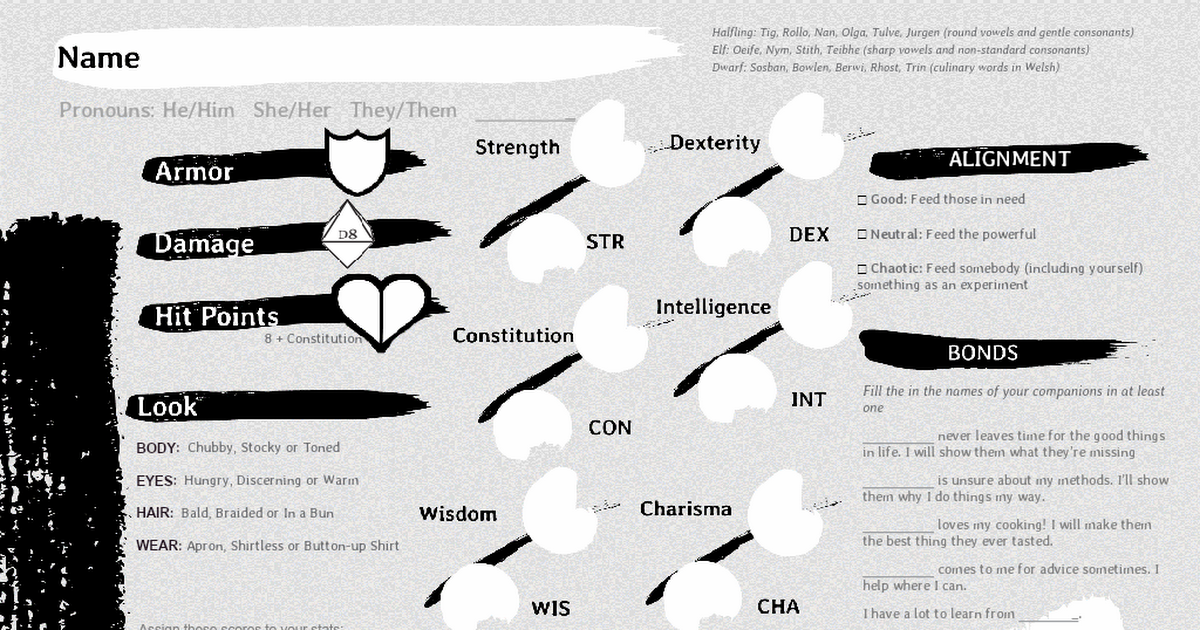 It’s funny, one of the reasons I made the gourmand was because I couldn’t find a cook class. So thanks. Also, it’s pretty different from mine but I wish I had thought of that last meal with death. That’s pretty inspired.

I’ve actually been half working on a DW setting that’s all about cooking and seeking new ingredients. I’ll toss my notes up when I get home, but it’s a mix of iron chef and dungeon meshi and meant to be lighthearted and ending with a good meal.

I really enjoy the use of different cuisines! They get me thinking about how they’d play out and be described at the table immediately.

I tried to read it but had to nope out at the cannibalism. That’s a thing that gets X-Carded pretty regularly, and I can’t help but think there’s a less obvious and more intriguing choice there, like perhaps stealing recipes and passing them off as yours.

Hiya! I’m actually the designer for The Cook playbook linked earlier in this thread! Super humbled to see it here so huge thanks for mentioning it

I’ve since made an itchio and a few changes to the playbook itself (https://tolinky.itch.io/the-cook)

You may be surprised to know that I actually ran into another in progress chef playbook while getting feedback on my one (https://www.notion.so/zackeys/The-Battlechef-Alpha-b7e0c000cfdd4726bc427e050324aea7 by Dristan in the Waypoint discord). There must be something particularly delicious in the Dungeon this season that’s been inspiring folks. I’ll say as well that I think having another take on this will be fantastic. There was a lot of very broad ideas I had for my playbook (chef battles, running a resturaunt, cannibalism, rolling recipes on tables, etc etc) that I threw out for the sake of focus and being able to fit the thing on a page. If there can be dozens of distinct playbooks about fighting and dozens about magic I’m sure there’s more than one way to skin a dire rat when it comes to cooking.

In regards to feedback I love love love the idea of having different schools/cultures of cuisine and I like your use of non-stat based buffs (e.g. being able to locate people who have eaten your cuisine). Also your names are brilliant. Only improvement I can think of is that you should slap a price tag on this because it’s good enough to sell.

Wow, thanks! That means a whole lot. Also, kinda cool and humbling to see all these good cooking classes.

If you’re interested (and I hope this doesn’t come across as crass or grasping) I have this and a couple other Dungeon World bits on DriveThruRPG. Half are pay what you want so feel free to browse.