Looking for reviewer for The Dune Rose

Hi,
I wrote a small (25k words) romance novel themed RPG based on the Solar System mechanics. The first version was written in Swedish and was somewhat favorably received on the Swedish scene. Now I have an English translation and would like to reach a larger audience. 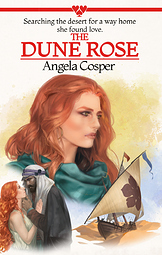 Would you like to get a PDF for review?

You could post the review here on the boards, or your blog or wherever I can direct people.

Send me an email at wilhelmsgames@gmail.com and I’ll hook you up.

I’m reading through the game right now and maybe I’m not up for a review, but I have several comments about the game (or rather the parts I’ve read). I’ll mostly focus on things that I feel could be improved but this doesn’t mean I’m critical of The Dune Rose - it’s simply a semi-structured feedback and not a review, that’s all.

The short story you start with in particular (but this happens in other places as well) could benefit from a slightly more mundane vocabulary. Bathroom that’s miniscule instead of tiny (it should be minuscule too), weather with no “signs of relenting” - this all feels very self-important. Some authors can pull this off but more often than not this kind of prose is uninviting. Tiny nits like this can be found in other places and I think this game would benefit from a native copyeditor giving once-over. I realize the cost may far exceed the expected sales (it would be around $500 for 25k words) so at the very least I’d run through the text and simplify things. It’s not a universal truth but I think that simpler is almost always better.

I’m not sure how flexible New Yorkers are when it comes to the depiction of their city but misrepresenting commonly known “truths” about the area is frowned upon on the West Coast. Subway in NYC is rarely a shelter from the heat as it get as warm as 37C/100F in there and people hate it.

Pages 1-2: The “Compare your calendars…” part seems out of place. You’ve briefly mentioned that this is a game for 3 to 6 players and since moved on to talk about a couple of other things that are needed. The “your” part in this sentence isn’t related to anything that you talk about in this paragraph up to that point. Same goes for the first paragraph on page 2 when you suddenly mention dice rolls but dice aren’t mentioned up to that point anywhere.

What I’m trying to say is that this part should be reorganized to improve the flow. It doesn’t strike me as helpful to those who know what ttrpgs are but could be very confusing to those who don’t. I’d also focus on tightening some of the wording there: the requirement for at least one participant to read “a couple of chapters” is extremely nebulous (also note that the dependent clause is missing a verb). How many chapters are the absolute minimum read for people to play the game?

Pages 3-6: I’m not sure I like the FAQ feel of this chapter. The answers to some of the but-s and to the last question are a little bit too condescending for my liking. The theme of the game is definitely worth exploring but it should be done in a respectful manner. I understand there may be resistance to what I’m saying but please, hear me out.

Safety - both physical and mental - at the table is paramount. I know you’re addressing physical aspect in your book but the patronizing tone in this chapter about the exploration of various topics is extremely off-putting. And this isn’t some cultural difference thingie, political correctness, or what not. I’m Polish, edgy Vampire sessions were very much en vogue when I was a teenager. But I can recognize today that what we did 20+ years ago was irresponsible and shouldn’t be replicated today. Sweden has its own share of horror stories of abuse and exploitation associated with LARPs so I would be very careful in exploring “steamy” romance. Not that it cannot be done, but I don’t think the attitude here is particularly great.

At the very least there should be some talk about safety tools by the table and you should familiarize yourself with them beforehand. This may not be enough but it would be a start.

Pages 7-9: It’s not clear that this section is about if one doesn’t read the example that follows. A sentence or two that this is game’s collaborative prep phase would be a nice addition.

Pages 17-22: Section about the three pools probably should be reorganized. Explain that character is described by a number of numerical values that are called pools, then describe what they are and how player sizes them. The “it’s just a number” explanation is also something Advances section should start with.

Common abilities and skills aren’t very well explained. In particular it’s not clear whether some or all of the abilities are common, and if some - how can I tell which ones? The associated pool is somewhat clear from the examples having (I) and (V) but the commonality isn’t.

This entire chapter could benefit from more examples inline (one Secret, one Key, etc.). I also feel that there’s a more theme-specific term you could use instead of Keys.

Pages 37-39: First paragraph in the chapter introductions section doesn’t explain clearly enough that there’s a single introductory chapter for each individual character. I would also explicitly state that GM’s character gets this intro chapter as well (or not, but I suspect they do).

Pages 48-49: By this point the lack of Key and Advance examples on pages 17-22 is even more glaring. I read this chapter and understood next to nothing. I will “get it” once I read chapters that follow but it shouldn’t be required for the reader to jump back and forth to get the grasp of basic mechanics. This is another chapter that feels underdeveloped when compared to examples that follow and contradicts your early claim that readers can grasp the game from descriptions or examples alone.

I actually like that examples are very much standalone rather than inline (with the exception of Key and Advance examples I’ve mentioned) but as it stands it’s almost impossible to understand the rules without reading the examples through.

Another potential improvement I’d like to see is to always have words that have mechanical implications Capitalized. When you’re talking about Keys here, I’d prefer to see “Each Key describes…” rather than “Each key describes…”. This way the reader knows that it’s an important part about the game system. The simple way to get consistency here is to write down the list of keywords and make sure they are always Capitalized properly in the text.

Pages 59-63: It’s not obvious what the “+ means +1 and - means - 1” even means. Description of rolls definitely needs to be improved. I’m not sure difficult and very difficult rolls fit the theme well. When I think about Harlequin books or Sagan om Isfolket or Romancing the Stone I see time and time again that major characters achieve impossible feats easily for the benefit of the story told. It’s a matter of taste, I guess, but I thought I’d mention it.

BTW: I’d name “other characters” from page 63 something else. “Background characters” I used in the previous paragraph or “minor characters” you use on page 77 would work but maybe there’s something better that could be used to call non-core characters (Extras maybe?)

End of story on 7 is extremely intriguing. How does it work in practice? As in: how fast does the heroine reach the point at which rolling 7 is very likely? How do you tie all story arcs at that point?

Pages 87-95: The difference between +1 and +2 veil seems to be nonexistent. Did you mean “someone in particular” on +2? At what point does the character decide who that someone is? It also seems to me that a +3 equipment could end the game in a single roll, no? You start with 5 advances after all so you can buy one easily (unless it’s not 1 level for 1 advance, but I haven’t seen it discussed anywhere in the text). It may be obvious but you could spell out that the greater the advantage one gets from an item, the harder it is to acquire that thing.

That’s as far as I got so far. I hope at least some of this made sense.

I’ll look into your comments. PM me your name and you’ll get credit for your contributions.

@Wilhelm, I haven’t read your game yet but I recieved so much feedback from @dominik, @Radmad, and @DeReel on my own game, Leadtown (a US Old West game), that I was a bit overwhelmed! I have obsessed for over a month on it but after taking these critiques to heart, I think my own game is much stronger for them.

I just mention this as to encourage you because while they point out the issues, they thought enough of it to read some and give notes. I suspect these comments from Dominik will help your game as well. Good luck!

@Deckard, my first game came back from the first external reader as 100 loose leaf pages all covered in red ink. That was a time to be overwhelmed.

Here we have 30 or so nice bullets, I have improved a lot over the years it seems.

Anyway, thanks for the words of encouragement.

I’ll look into your comments. PM me your name and you’ll get credit for your contributions.

Thanks, that’s very kind of you and it’s definitely unexpected.

I have obsessed for over a month on it

Hey, I’m sorry to hear that. I apologize that my comments caused you distress, at no point was that my intent. Critique is as much a matter of how one takes it as it is of how it’s laid out so I’ll try to do better next time.

@Deckard I appreciate the mention. I would love to critique but life is busy right now so can’t commit to doing a read through. If you have specific questions I might be able to do some reviewing but no promises.

I don’t want to hijack this thread but as a one off note:

@dominik, actually I appreciate all the comments I got. I got around 100 bulletpoints overall on that version so that felt like a lot at first. When I dug into them. though, most of the comments were about consistent labeling and pushed in the same direction. I am certain that my current draft is more clear and the game is more focused now.