I am known to be a big Dungeon World person. The Gauntlet was built on Dungeon World, I have run—easily—200+ sessions of it, and I co-host a popular Dungeon World podcast. BUT, I have been pretty burned out on DW for awhile. It just doesn’t spark my creative energy like it used to (I’m much bigger into WoDu-fueled OSR play these days). I think the thing that might draw me back to DW, though, is Stonetop by @Jeremy_Strandberg. I gather Stonetop has drifted quite a bit from DW but still retains the basics.

I’m curious if anyone has any experience with Stonetop. What did you like about it? How does it compare to vanilla DW?

Speaking of my DW podcast, we talked about Stonetop at the beginning of the most recent episode. 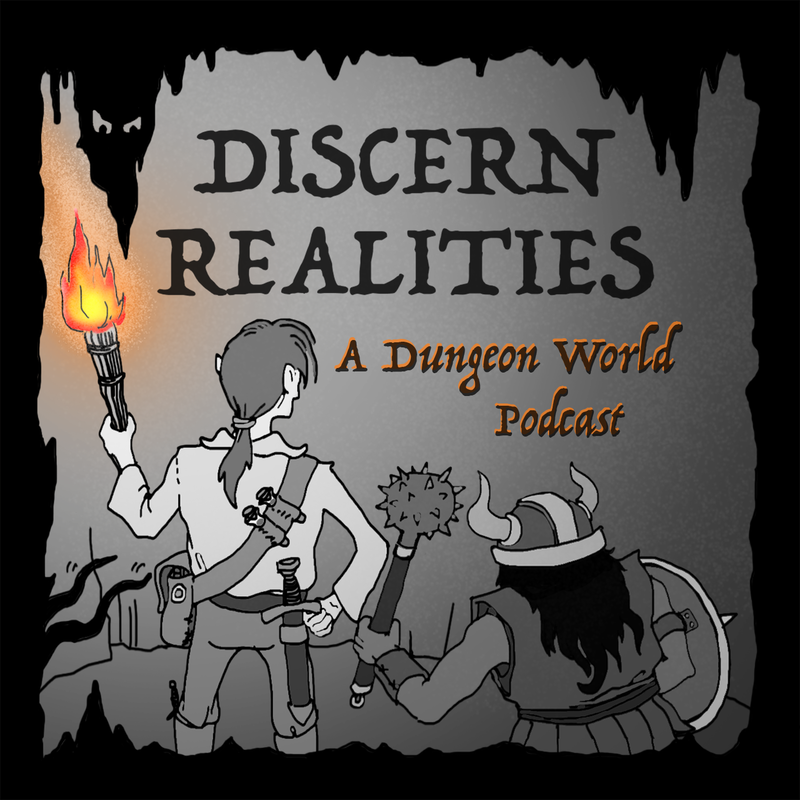 Cc: @jasonlutes, who I think is publishing?

I’m obviously willing to talk about what’s different and how it compares to DW, but seems best to let others weigh in!

I’m very excited for it! I only caught wind of it through that Discern Realities episode but developing a home anchor is such a great premise.

Stonetop is a really cool setup, but I would agree it’s quite different from DW. To use a term that’s going around lately, I’d almost say it’s like an “anti-canon setting” for DW, a very detailed playset for a particular locale with a superset of possible problems, but where the campaign is instantiated differently each time.

What is it that you find fantastic about it @Maezar?

Granted, this is me, but I have never played in or run a series of these that didn’t go pretty dark. Deliciously dark. And let’s not even talk about how it gives the players fodder for intercharacter drama: that’s a given. It’s like a telenovella but without the fancy clothes, if that even makes sense.

To give some sense of what Michael’s talking about, he was playing the Seeker, the Not-a-Wizard class. Stonetop isn’t exactly low-magic, but magic is weird and fragmented and poorly understood. The Seeker doesn’t have spells, per se. Instead, they pick a background, which gives them a choice of Major Arcana: 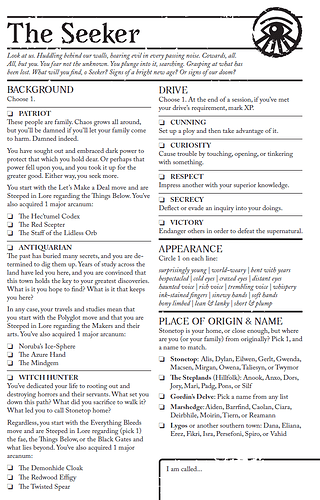 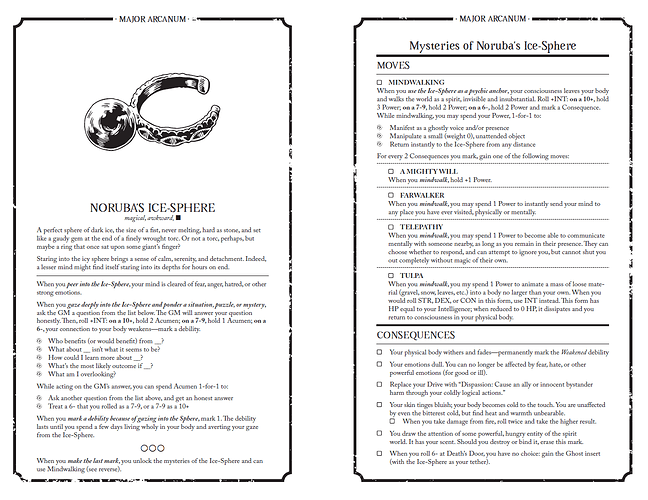 Each of the Major Arcana is similar… they provide some utility to start with, and have requirements for unlocking their mysteries.Once the mysteries are unlocked, the player gets new moves or spells or options (different per arcanum), but can also start racking up consequences (which are basically premade grim portents).

The Seeker also gets dealt 3 random Minor Arcana. They pick 1 one that they’ve unlocked and mastered, one that they possess but haven’t mastered, and third they have a lead on. Michael’s Seeker, Barrfind, had mastered this one…

…knew where to find this one…

…and had a lead on this one:

So… no standard spells. No automatic progression based on level. Fiction-based unlocking of powers, and all sorts of slow, self-inflicted consequences and difficulties for the Seeker.

At least for the Seeker… it’s definitely the most complicated class. The other two “magic” classes (the Lightbearer and the Blessed) are a lot more straightforward (though still significantly different from a Cleric or Wizard in DW).

This all sounds pretty dang cool to me.

It also seems like there’s a fair amount of polish. When are we looking at seeing a release of this ‘cause I’d love to look at it! Is it going to be a kickstarter?

@Kyle_Simons, the plan is for it to be the next Kickstarter that Lampblack & Brimstone (aka me) launches. Jeremy has been laboring away assiduously and playtesting for literally years at this point, so most of the components are well-developed and in place. When exactly we can launch will depend on how much design and layout I can get done over the next few months, because we want Stonetop to be as close to print-ready as possible before we push the button. As soon as that button is ready to be pushed, you can bet we’ll let everyone here know.

I really like that Stonetop has a sense of place, that you are part of a community that has to face hardships and that interacting with NPCs will likely be more substantial because they are your neighbor or - when met outside of you steading - might become either allies or enemies: You can’t murderhobo yourself out of a problem. I also love all the Arcana Jeremy has shared over the years, they are incredibly creative, have “long term project” written all over them and tend to bestow powers to the character wielding it while corrupting them as well - which is especially juicy because characters with magic items are still part of the community that might get corrupted along the way.
I’d love to play a long campaign of Stonetop in order to see the community grow or wither, to see how characters find a compromise between cultivating the land and protecting it and to see relationships between characters and NPC develop.
However that is also why I don’t think it is particularly well suited for the Gauntlet style of playing which is focused on short campaigns with an open table policy.

However that is also why I don’t think it is particularly well suited for the Gauntlet style of playing which is focused on short campaigns with an open table policy.

Yeah, this has been one of the reasons I’ve been hesitant to really pull the trigger on running Stonetop for the Gauntlet. The game is decidedly long-form. Like, my home game ran for 2.5 years with ~60 sessions, almost all the same PCs throughout.

The materials are also optimized for FtF play… there are no character keepers, and the layout of the playbooks is set up for printing and folding into booklets.

I don’t know enough about Stonetop to say, but I would think having the persistent town of Stonetop as the thing that binds the campaign together would actually make it very well suited to open table play.

The two problems I foresee are:

Still, I think it’ll be an interesting challenge.

Oh, but that’s just like a Tuesday on Gauntlet Hangouts. I feel confident I could pull it off open table style.

I love the idea of minor/major arcana working both as moves and fronts/quests. The flipping of the card reminds me of spells from Eldrich Horror board game. Now I so want to incorporate this into my current game!

I will definitely be getting Stonetop as soon as it is available. While I might not be using the exact ruleset, I see it as a gold aethetrium mine of great mechanics to use in any PbtA game!

Oh, hey! Luke (@gamesfromthewildwood) just joined the forums. I bet they’ve all sorts of things to say about Stonetop and how its different from Dungeon World. They’ve been one of the most active and helpful playtesters!

Gosh, where to start…

First thing, biases on the table: Stonetop, even unpublished, is in my top 10 RPGs. Maybe top 5. And while I think Dungeon World has done good things for the RPG scene, I don’t actually think it’s a good AW hack or a particularly well-designed game. So I’m hardly a neutral observer here.

In no particular order of importance to me:

First and most prosaic: Stonetop runs much cleaner than DW. All the painstaking, nitty-gritty editing work @Jeremy_Strandberg has done clarifying the function of the basic moves pays off in spades. Play feels smoother, simpler, and more pleasant. Added to that, advantage/disadvantage is just so much more intuitive than tracking endless +1s forward.

Tonally, Stonetop couldn’t be more different. I don’t know why precisely, but even with active attempts to set tone every DW game I’ve played, GMed, or watched ends up drifting towards goofy/silly/tongue-in-cheek. Further, there’s some very real gonzo/absurdist tendencies baked-in because of the inherent “yes, and” tendencies of the game (above and beyond what’s usual for AW-adjacent games). Stonetop is grounded, and tends towards treating the game world with seriousness and integrity (I think perhaps because it actively encourages/demands emotional investment) along the lines of the fantasy literature I’m more looking for.

Stonetop also feels rooted in a way that DW’s murderhoboing doesn’t. The specific detail of the setting, the fleshing out of NPCs, the care given to the mundane details of survival (beyond just “mark off one ration”). The last session my group played was probably the strongest we’ve had yet, and it was a homefront session. All we did, basically, was interact with NPCs and follow the characters around the village and the daily texture of their lives.

Speaking of NPCs, I think DW is a weird outlier among first-wave AW-adjacent games (Monsterhearts, Sagas, Urban Shadows, etc) in that it doesn’t really care about people or their lives? Every other original hack of AW is deeply engaged with NPCs, and their feelings and humanity, and the emotional landscape of the world. Dungeon World kind of lacks that, where Stonetop has it in spades.

I could go on endlessly. The playbooks are phenomenal (the Lightbringer is 110% my choice if I ever get to play). The minor & major arcana are all superb. The setting is a perfect blend of familiar and intriguing, with so many spaces and hints at more that pique the curiosity. The maps, illustrations, and art style are gorgeous (shoutout to @jasonlutes).

Also, as a designer it’s been super influential on me.

I think it’s a strange irony that Dungeon World’s marketing and discourse has replicated the same bad habit Adam loves to excoriate D&D for: claiming it’s the perfect game for all fantasy narratives. I want more specific, thoughtful PbtA games exploring niches of the fantasy genre that aren’t just “D&D with less math”.

Seeing how well Jeremy did hearth fantasy with Stonetop got me started writing my own fantasy PbtA game and provided constant inspiration.

This might be what inspires me to finally get over my anxiety and actually sign up for a game!