My Framework for Running Dungeon World

I’ve been working on the GMing chapters for Stonetop lately, and really thinking about the structure of the conversation. That lead me to writing up this (very long) blog post.

I’d be all sorts of interesting in thoughts or feedback. In particular: 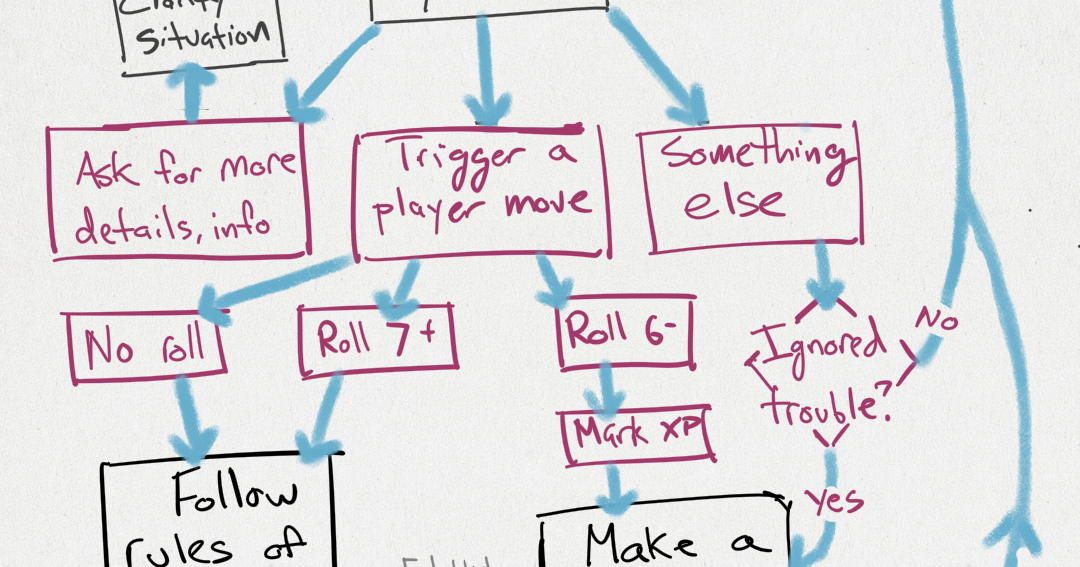 My Framework for GMing Dungeon World

I've been working on the GMing chapters for Stonetop , and it's made me think about how the conversation really flows. I've also been think...

Frankly, I live and die by your DW GMing advice, so this is great. One of the things I do often is reread GM principles/moves/reactions/et al across PbtA games that I pick up, even though they all fundamentally say the same thing. What I think your write-up does well here in walking through those things is meditate on why they are core skills or guiding lights to GMing (particularly PbtA).

DW isn’t my game of choice but I found this an interesting and informative read for my running of other PbtAs. Thanks @Jeremy_Strandberg.

Excellent stuff, Jeremy. Everything here rings true to me, and the way you’ve explained makes a great deal of sense. You should be proud of this article! All that experience is clearly paying off.

Nicely done! I like the GM moves front and center to remind me to vary them up and not fall back on the ones I’m most comfortable with.

Your article is purely amazing.

You point out what I find sometimes missing (MC making a soft move) and then I wonder for hours why was this game weak?

The situation when MC frames scene establishes a situation but does not make a move and asks players “what do you do?” sometimes is quite empty and hard to start.
Example: “You are in the vault, it looks … what do you do?”
Answer: “I guess we start packing the gold?”
This is missing the key component to put tension in the game.
Example: “You are in the vault, the trap you triggered is pouring tons of sand inside per second, also the orcs and trolls are in hot pursuit, what do you do?”
Now that’s what I called a well framed action scene just pregnant with opportunities and actions to take.

As to what games break your structure?

I would say games that are not really about adventure. Like Urban Shadows. Where players have much more authority in deciding where they go and what do they want to do. I would often not do “soft move” for opening because we often had a move to establish the situation of a meeting with NPC or because we just know why the PC and NPC are meeting and situation does not require me to heat it up with another softy.

What would I add?

I find it that PbtA games don’t enough what should MC do on a miss. I think more should be said and explained about Fail Forward == Yes, But concept when making MC moves. Cast a Spell does force a Cleric to roll every time he casts, but a miss doesn’t have to mean “no and” it can be “yes, but”.
Same goes for Fighter doing a bar brawl, a miss doesn’t mean some random dude beats up our fighter, it means our Fighter killed the random dude, everyone saw and and there will be problems.