My next game is about Vikings and toxic masculinity 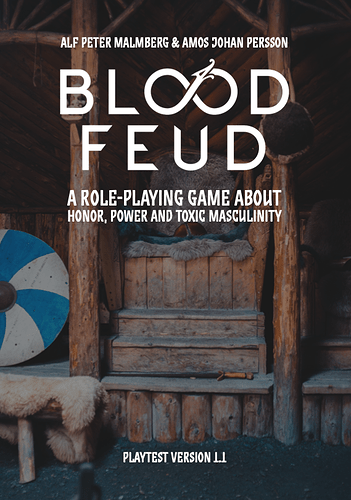 Blood Feud is a GM-less roleplaying game about toxic masculinity set in the Viking Age, designed by me, Peter Malmberg (a Swedish game designer and publisher) and Amos Persson (a queer Swedish game designer). The players take on the roles of men in a Viking society, where you explore the norms of being a man at that time—and the social consequences thereof.

The game has been playtested at several conventions during the last few years, and we are now at a stage where we want to share it with the rest of you.

It would mean a lot to us if you had a look at the playtest document and told us what you think. Please share any questions, feedback or suggestions you might have. The game is scheduled to go up on Kickstarter in february so until then we hope that some of those interested get to try it out!

There is more info about the game at our webpage, and my co-creator Amos Persson just wrote this FAQ answering some of the most frequent questions we have gotten so far.

Thanks for your time!

Are there specific sections or mechanics that you think could use special scrutiny, you’re concerned about or that’d you particularly want feed back on? What are some challenges you’ve had developing the game that might help us provide feedback?

Hi, thanks for writing! I think the first step is to make sure the rules are understandable - is there any section that needs more description for example? Is it more or less clear how you run the game?

I have always felt that these are especially inclusive forums, so if there are any issues with the overall incslusivity of the game - we would very much like to hear it.

Other than that, experiences from playtests would be of great value!

Hmm, regarding specifc challenges I must say that the Escalation, and Strike a Deadly Blow moves have been the most tricky to design. Is it clear how you determine what counts as a valid Escalation and not? We have struggled with the problem that Escalations often have been too soft, which messes up the token economy slightly (but doesn’t break it).

Now that I think of it the Feud system has been the least tested part (since blood feuds often just happen once or twice per session). So any input on that would also be appreciated.

Also the Act structure was added pretty late in the design process, so that part might be up for some criticism!

On the character sheet under Male Relationships, the prompts are “I look up to/down upon them.” Is there a reason y’all chose to use “them” instead of “him?” I wonder if there is value in forcing a binary framing with “I look up to him” and “I look down upon him.”

On page three of the book, there is a link to the Traffic Lights safety tool on DriveThruRPG, but there’s no formatting to indicate that “drivethrurpg.com” is hyperlinked. Something like an underline or differently colored text would help make that obvious.

I’ll read more closely and come back with other/more feedback!

Thanks for checking it out!

Yes, you are right - we should probably change it to “him” since only men are targets of that mechanic. Well spotted!

And I agree, it’s probably a good idea to show the links more clearly.

I appreciate the help

The cover art is quietly evocative, the way the game’s name is written nicely fits the subject matter, and the subtitle is what caught my interest in the first place.

For a moment I thought “Gee, the conclusion is already front-loaded” but as honor and power are mentioned, too, that impression doesn’t hold up. In any case, the subtitle is both informative and intriguing and that’s key. Blood Feud by itself would just have been another viking game.

Best of luck to you guys!

Glad to hear your thoughts about it.

The project is coming along smoothly. We now have a Kickstarter page and a smashing cover by Ronja Melin. https://www.kickstarter.com/projects/blackfiskforlag/blood-feud-an-rpg-about-honor-power-and-toxic-masculinity 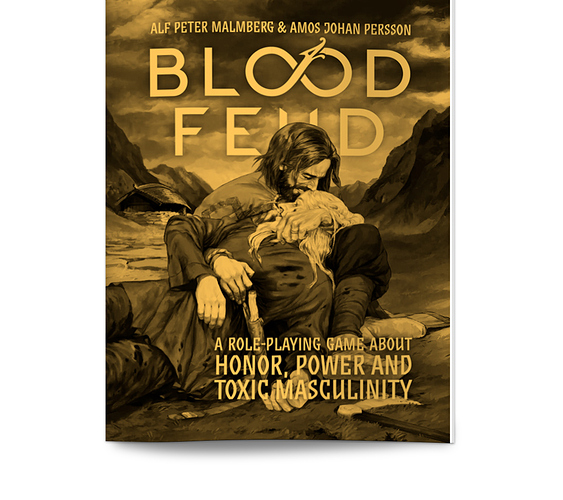 bf-mockup1072×952 276 KB
It will be up on Kickstarter between 18th of February and 4th of march, as a part of zinequest. Very excited about it all

And we are live! Check out the project over at Kickstarter if you’re interested! 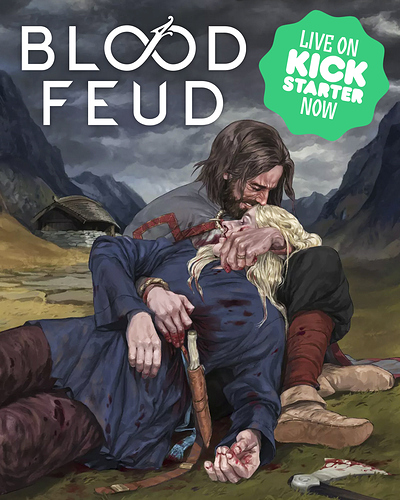