So I am working on monster zine for Old School Essentials. This is a sample page. I would really like any feedback people are willing to offter. 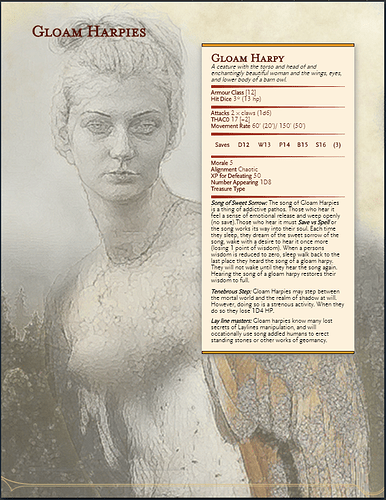 I admit, seeing this done in the 5e “house style” kinda threw me for a loop. When I saw this on Twitter, skimming down my TL, I didn’t even realize it was for OSE!

I am using the Homebrewery because it allows me to do Layout myself.

Gloam Harpy: No. App. 1-8, HD 3, AC 12, ATK (claw/claw)*, DAM 1d6/1D6, MV 60’/Fly 150’**, SV F3, ML 8, AL: C, TReasure Type: (?), XP:50
*A GLOAM HARPY MAY SING IN LIEU OF ATTACK (This is missing - lots of cute description, not meaningful mechanics) and any within 100’ who hear the song must Save vs. Spells of suffer a curse/ Each night they have not heard a Gloam Harpies’ song they will awake after a nightmare and suffer a loss of 1 point of WIS, with Death at a Wis of 2 or less. Hearing a gloam harpy sing will restore their WIS.
** Gloam Harpies can travel through the tenebrous for short periods, emerging from the realm of shadow up to 1000’ feet from their start location but suffer 1D6 damage form the effort and only use it to spring deadly ambushes and escape death.

Gloam harpies are nightmare combinations of beautiful women (ARE THEY ALL FEMALE??? This is a question, harpies traditionally are a misogynist joke, but twink harpies seems like they would fit) and owl. The shattering beauty of their songs haunts sleep and unwinds reality for mortals who hear them. When gloam harpies congregate in flocks (3D8) they can use their song to manipulate the real and raise rings or piles of crude standing stones.

I’m seriously not trying to be a jerk, but you have a harpy stat-line with few changes that make them less dangerous for a B/X based system and it takes an entire page? The clip art is well chosen, but even with the 5E style box it doesn’t need that much space. You could place a statline in a small paragraph, or even just put “as harpy; song causes curse, save v. spells or lose 1 WIS per night until death; Blink at will for 1D6 hp”.

I see something is lost with that kind of minimalism, but either A) This is for an adventure and your can pout in the detail in the adventure - show don’t tell. B) This is for a monster book and it’s a harpy with minor changes. It’s cool you’re rethinking harpies, they’re a neat and underutilized monster, but if you’re going to take an entire page (it’s a good looking page) give something more.

Thank you for the feedback.