Hi folks, I made a thing and I’m struggling to get feedback. It might just be too simple, not worth your time, or plain boring. I’m ok with hearing that but feel a bit lost not getting any feedback.

ENI is a rules-light, one-page, role-playing game system for new players who just want to jump into any setting. I use ENI with a group of six 8-10-year-olds every week, as well as with my 8-year-old son on the drive to school. I tried to find the simplest and most meaningful set of rules that went just beyond roll a die and succeed on a 4 or higher.

In ENI, each player character starts with a name, an adjective, an item, and 6 dice that represent their stamina and health, and will get more dice within the first few sessions. Players choose which one of their ready dice to exert when faced with a challenge. Challenges succeed at 4 or higher, with varying degrees of success.

Players who get into the story get a one-time +1 that they can add to a die roll. There are loose rules for combat, turn order in combat, resting, and companions. There is also a table for great successes. The story, special abilities, upgrades, gear, loot, etc are left to the player’s and game master’s imagination.

That’s mostly it! ENI is only a system, it does not have any content written for it yet. Please check it out here: https://ex1st.itch.io/eni I will thank you for your time and effort. 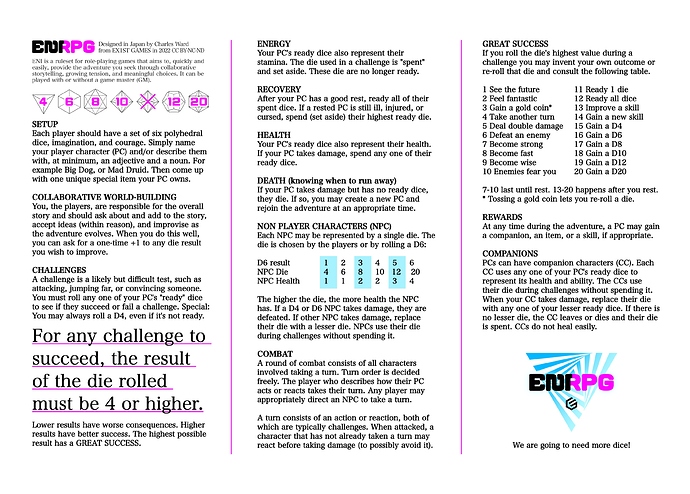 Note: I already submitted ENI to a previous One-Page RPG Game Jam, but I have improved it a bit since.

It’s simple and it works. You need adventures as you said, to manage resistance.

Thank you for the feedback. Job done then

I will probably revisit it a year from now.

Who’s your target audience? If it’s children, then perhaps words like “polyhedral” are too hard to understand.

Is this supposed to be a stand alone system? Because you’re using things like NPC without describing what an NPC is.

About a third of your system is about dying.

The NPC generator seems a bit random. A dragon can have d4 and a goblin child a d20 die.

have a set of six polyhedral dice

I have no idea what the crossed out d10 means in the image above.

When you do this well, you can ask for a one-time +1 to any die result you wish to improve

I don’t understand when “well” is good enough, especially when every roll can give a special bonus anyways.

I assume the +1 is after the roll is made.

You must roll any one of your PC’s “ready” die

When reading this, I had no idea what a “readied” die is.

When attacked, a character that has not already taken a turn may react before taking damage (to possibly avoid it)

I don’t understand the companion rules at all. It doesn’t give you anything as a player, so it’s complex without actually giving something.

Other than that, it looks alright.

This is what I’m talking about!!

Thank you. Every point was noted and I will be working on it today.

About a third of your system is about dying.

Oh… I had not noticed. I think death is important, but I would say 25%. Let me check and see if I improve something in this regard. Thanks.

The NPC generator seems a bit random. A dragon can have d4 and a goblin child a d20 die.

The players can choose the die or roll to see if the shadow lurking in the cave is a dragon or a goblin.

I don’t understand when “well” is good enough, especially when every roll can give a special bonus anyways.

This term is vague, and I should cap it just in case. Thanks.

When reading this, I had no idea what a “readied” die is.

I don’t understand the companion rules at all. It doesn’t give you anything as a player, so it’s complex without actually giving something.

Thank you. The main benefit is that they don’t spend their die. But since that is what NPCs do, I should just explain it that way. Thanks again.

This part seems broken. Or rather, you might as well roll that D4 to see if you avoid it.

Thanks again. I’ve uploaded a new version to itch, see the opening post.

Is there a way to edit the Opening Post at this point in time?
Is it only editable shortly after it’s posted?

I was thinking of updating the image with the new wording.

Rewards and the Great Success table raise a lot of questions for me.

Thanks for the feedback.

What do items do?

It depends on the item. The items are either chosen by the game master, or players.

*OCs meaning “other characters” (aka NPC).

What do skills do?

The same as above. In my group, players seem to stay true to their character’s specialization letting those who have that skill (hacking a computer) do it.

Thank you. Good point. I wanted fuzzy rules here. It’s mainly thematic, a way to give the players permission to try something, and lean into if they fail a roll.

This section has also been updated. I see what you mean. “Become Fast” is just a way to say that if a situation called for speed you either automatically succeed or get a +1 or whatever the game master/players deem appropriate.

“See the future” would be… a made-up scenario, like everyone succeeding, or a bridge being crossed, or someone betraying someone… then it becomes part of the story and may become true, may be avoided, may be forgotten.

“Learn a secret” same as above.

Both would be only known/communicated to that player or shared openly, and mad eup on the spot, propelling the story one way or another, foreshadowing stuff to come.

“Deal double damage” One successful hit would take a OC down twice or outright defeating a D6.

“Improve a skill” if you use a skill/ability you would get a +1 on the die result. So a +1 but for a specific action. Note: Skill are just abilites, no diference. I will phase out skills.

Thanks to your feedback, I’ve fixed a few things already.

Do I need to spell out the mechanical effect of the buff, or can I leave it up to the players to decide?