Solar System & The World of Near available in PYWY! (The Shadow of Yesterday system)

I just got awesome news from a friend that Eero Tuovinen (Arkenstone publishing) just re-published the 2008 edition of the Solar System and the 2009 World of Near on DriveThruRPG! While the Solar System was easily available online, the World of Near was almost lost to the ages and limited to those that bought a print copy when it was in print, and it’s great that there is now an official way to get booth books in PDF form!

If you don’t know what these are, the Solar System (2008) is a generic revision of the system published in the hugely-influential The Shadow of Yesterday (2006) by Clinton R. Nixon. The World of Near (2009) is a revised edition of the sword-and-sorcery setting of TSoY designed to go together with the revised Solar System handbook.

You might have not played this game, but many parts of its design influenced many later games that you might have played, such as Lady Blackbird, Apocalypse World, Blades in the Dark. It was really one of the first games to bring modern dramatic storytelling mechanics to a framework that resembled more the traditional players-GM split. Its harm system is still used in many current titles.

Best of all, the entirety of both books is sold under Pay-What-You-Want and the text is released under a Creative Common license. Hack’em!

These are truly foundational books, and still very much playable! Take a look: in the times of the 2020 plague, as we isolate ourselves from our neighbours and our disposable income shrinks, there is nothing better than a free RPG. 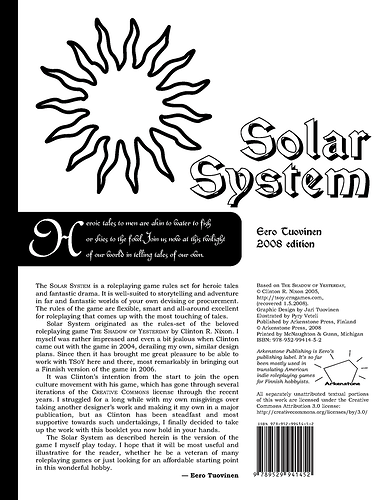 Solar System is the extremely google-unfriendly name of the rules engine used by The Shadow of Yesterday, the classic in

World of Near - Arkenstone Publishing | DriveThruRPG.com

300 years ago the old world was destroyed, only to be reborn as a vivacious pulp fantasy milieu full of cruel wickedness