It’s understandable that, with the resurgence of interest in the hobby thanks to Critical Role and other streamers, it’s GMed games that are at the fore. January saw a particular initiative to help folk become GMs - which is great - but the more and more talk I see about how to become a GM, how to be a great GM, how GMs are so important and scarce, the more I want to mention that not all rpgs need a GM. There are games out there that a group can pick up and play with everyone taking a similar role.

GMless games are my favourite type of rpgs. To that end, this month I’ve set-up a short-run blog highlighting GMless games that I and others enjoy.
https://gameswithoutmaster.blogspot.com/

Check it out and follow along if you’re interested. I have some ‘guest posts’ lined up covering games I’ve never tried. (If anyone is interested in being such a guest then let me know.)

My hope is at the end of the month to have a small resource to point people at who are maybe interested in GMless games but don’t know where to start.

Without a doubt For the Queen (and all the Descended from the Queen games) should be at the forefront. It’s such a brilliant example of how easily you can get a collaborative story with folks of any experience and skill level. Teaches active listening, sharing, safety tools, and all this brilliant stuff that just makes people more nuanced (and dare I say “better”) gamers, whether game master or player.

This is great! There is a wide variety of GMless games, and so many reasons to investigate them (and becoming a better player, as @tomes suggests above, is a very important one). Glad to see this, and will go read!

Dialect. So much value in such a little game. It’s my go to game to whip out and show people who think all RPGs look/feel like D&D. 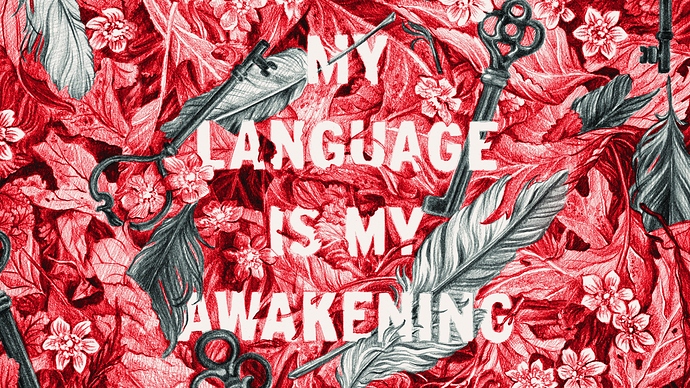 Dialect: A Game about Language and How it Dies

Who was the Isolation and why were they lost? In this game, your language is the story.

I haven’t played many of these, but I quite enjoyed Downfall.

I recently wrote a GMless game called The Love Balloon with my partner recently. We went extremely light with the whole system and I’m proud of how it all turned out. The game can basically be summed up with four core systems:

Backstory and Motivation - Each character rolls randomly for a backstory and motivation that informs their character. We created a 6x6 table for each and reverse engineered them from the available episodes of The Love Boat on Youtube: 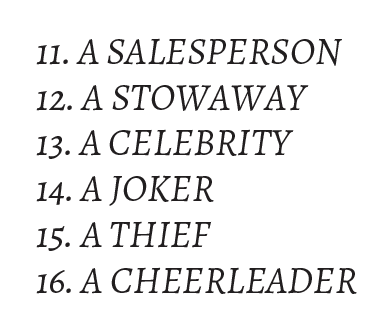 Structure of Play - We divided up the game into seven phases that correspond roughly with the act breakdowns of episodic one hour dramas on TV. Each scene features two players each except for the climax, which features the entire ensemble in an additive way.

Story Beats - To help prompt players frame a scene, we created a table of broad story beats with plenty of room for interpretation: 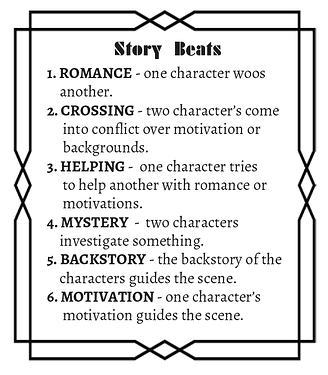 The climax of the game - Night with the Stars - has all cast members following the same beat: confess their feelings and face the consequences.

Karma - This one is taken directly from Fiasco and helps indicate how to end a scene. An observing player chooses one player to succeed or fail. The rule purposely only denotes on player and is not zero sum: another player could succeed as a result of one failing, but it shouldn’t always play out that way.

The games that have been generated have always been whacky, zany, heartfelt, and full of heartfelt moments and hijinks. It’s been an absolute source of joy designing and playtesting the game and a highlight of my 2020 thus far.

You can find the game free on Kickstarter as part of Zine Quest 2.

I’ll also be attending Orc Con in LA this upcoming weekend and running games at Games on Demand on Saturday. Give it a shot and let me know what you think!

I’ve also got my own offering in the field, A Cool and Lonely Courage by (ahem) Plane Sailing Games