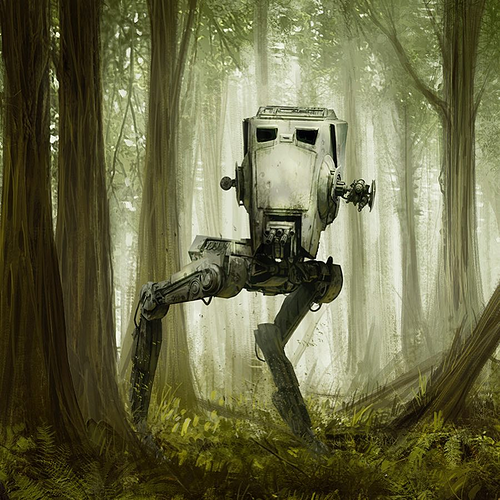 After the death of Palpatine, Grand Moff Zsinj was recognized by many as the most powerful of the post-Imperial warlords. In fact, his official title of “Warlord of the Empire” popularized the term “warlord” for the renegades who broke away from the crumbling Empire, when in the initial chaos following the Battle of Endor he proclaimed loyalty to the Empire and used his legal title to foster an appearance of legitimacy.

In this two-session series, you’ll be playing as the crew of an AT-ST in Zsinj’s Empire, part of the warlord’s army fighting to keep control of the Quelii Oversector against other warlords, the forces of the New Republic, and indigenous populaces. In this game, we’ll deal with the idea of being part of a military force on the other side of “the good guys”. Your characters aren’t evil, they’re caught in the remnants of an Empire that never gave them a choice to be anything other than its soldiers. During character creation, we’ll how each PC became a soldier in the Empire, and what they thought when they first heard Palpatine was dead.

Hell on Legs is a Star Warsy reskin of a tank RPG from Newstand Press called Hell on Treads. Hell on Treads is a small, cooperative roleplaying game about the crew of an armored fighting vehicle.

Greg Gelder is a special guest for this series.

This game is part of the ongoing Star Wars Saturdays series. The time setting is shortly after the end of Episode VI of the Star Wars movie series (that’s Return of the Jedi). The Empire is falling apart and the New Republic is trying to wrest control of the galaxy from its clutches. Characters and settings created in this miniseries will exist in the SWS canon for future miniseries.

The Gauntlet Inclusivity Policy will be in play and the X-Card safety tool will be in use as well as a feedback tool after each session.