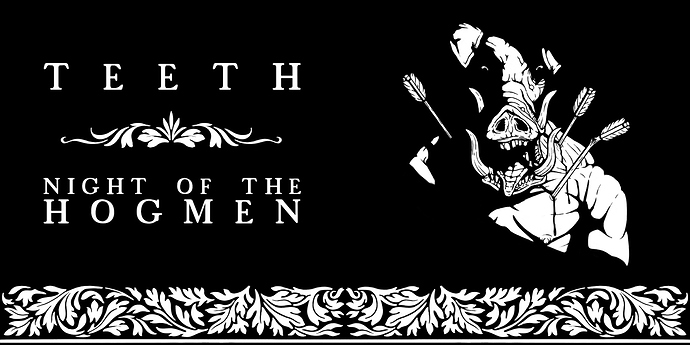 Teeth is the in-development game by Rossignol/Davies, a Forged in the Dark powered game which they describe as “Jane Austen’s Stalker.” This is a playthrough of the first teaser zine released, a simplified and relatively linear romp which gives a taste of tone and mechanics. It’s available to download from Itch.io as pay what you want.

To quote the manual: “Night of the Hogmen is a grotesque, single-session table-top roleplaying game for 3-5 people. It requires one game master (GM) to run the game, and the remaining players to portray hapless travellers, forced to flee from a ravening horde of hogmen during one grim and grisly night in a cursed corner of 18th-century England.” That sounds about right.

No Experience required of either the system, the fictional late 18th century setting or Hogmen.

The Gauntlet Community Code of Conduct will be in play and safety tools (Script Change and X-Card) will be in use.