Traitor type mechanics in an rpg?

I’m kicking around the idea to make a small game about Cold War spies, something with given roles and a certain set-up as a starting position, kind of like Lady Blackbird. I’m thinking about the possibility of having a random character be a mole within the spy organization. Now, do you think this kind of idea can work in a rpg context, and if yes, how?

I can think of some different approaches. There are probably a ton more.

Depending on the audience, you can reward the traitor player or character or not. Or punish them why not.

For more complex mechanisms, I suggest stealing from party games that do this well (werewolf/mafia, the resistance, saboteur).

I don’t think there’s anything wrong with making the traitor public, but consider what emotional response you want to create. Is it a game where everyone is paranoid and prepping to backstab each other? Or is it a game where you get a bird’s eye view of a spy trying to pull off a job? Either are really awesome and tense scenarios but probably not compatible in the same game.

I like the idea of nobody knowing who the traitor is, it’s a hard lock that will prevent anyone from being found out too early. It will probably be jarring to players not familiar with narrative games, but that leans on what kind of audience you expect to get.

You could also have a setup where all the characters are pre-generated, but assigned secretly. a “character” would need to relegated to job/past/skills instead of appearance or attitude but that could create fun stories where players try to act in accordance with or subversive to the role they’ve been assigned.

Yeah, I was kind of thinking one possibility would be to have both pre-gen characters (the station chief, the deputy, the handler, the agent etc.) and then also pass out drives/goals cards in secret, so that who is the mole would be randomized. You could also have one more goals cards than characters, so you don’t know for sure if there even is a traitor.

Still struggling a bit coming up with how that would actually look like at the table, though.

The additional card trick is brilliant.

my gut instinct if you’ll need public/private trackers towards goals, much like a lot of secret traitor boardgames do right now. There’s some overarching goal (either narrative or mechanical) that forces the characters to work together with a distinct goal the traitor is working towards. Making it public means everyone gets more and more tense as it ratchets up, and including random or unrelated events that can influence it means everyone will still be guessing towards the end. Making it secret gives the traitor more breathing room as everyone will need to operate at max alert for the entirety of the game, but it could also be anti-climactic if wins jump out of nowhere.

I think one thing to ask is how often do you want the traitor to succeed? An evenly balanced game will be difficult to pull off, but an intentionally unbalanced one in either direction allows for a stronger narrative theme.

The fundamental question (as others have pointed out) is whether you want the traitor to be a secret role or not. It comes down to what kind of game do you want to play? If the traitor is secret, it’s a game of tension, secrets and subterfuge between players, where they are playing competitively to achieve their goals. If it’s public knowledge, then it will rely heavily on dramatic irony. Players will be able to collaborate to tell a story with lots of moments of individual tension, but there will be less of that steady burn. Personally, I don’t like RPGs that rely on competition between players, and I think that letting characters be opposed, but openly, lets the players lean more heavily and comfortably into their roles. I also love dramatic irony in play, though your mileage may vary. In my experience it’s also very hard to maintain that level of conflict between players without some bleed and negative feelings. You can do it in a one shot but not much longer.

I’d also recommend looking at Uprising from Evil Hat. It’s built around a traitor mechanic (since it’s based on a setting that was originally a social deduction game). There’s some interesting tech there. Mutant: Elysium also has some traitor stuff, but it doesn’t feels as well thought out or interesting.

I’d also recommend looking at Uprising from Evil Hat. It’s built around a traitor mechanic (since it’s based on a setting that was originally a social deduction game). There’s some interesting tech there.

That seems super relevant to this, yeah! Thanks for the recommendation.

Anytime anyone says anything about secret “roles”/hidden information in an RPG, I have to direct them to Shinobigami.

You could very easily run a traitor scenario in that game as written.

You could also base it around something like the Prisoner’s dilemma, that everyone will gain if they follow the common goal, but the reward is higher if anyone breaks it. So everyone can play nice and build trust, until the individual reward is too tempting.

I’d also suggest looking at The Mountain Witch – it has an interesting trust and betrayal mechanic. The couple of times I’ve played it, the reveal has been a significant scene, even when you know or suspect it’s coming.

My first instinct was, “Why not play to find out?” Which is covered, I think, by your last option – a retroactive decision.

It also occurred to me that failed rolls could be fictionally less about the character’s inability to address a challenge and instead their hidden desire to sabotage the effort. So, you track failed rolls and whomever has the most at a given moment in the game is, after all, the traitor.

Yeah, I was kind of thinking one possibility would be to have both pre-gen characters (the station chief, the deputy, the handler, the agent etc.) and then also pass out drives/goals cards in secret, so that who is the mole would be randomized.

I’d look to Paranoia for inspiration on this – particularly to the fact that almost all Paranoia PCs have hidden goals/objectives (for two separate factions!) and those objectives are going to be driving how they approach play.

One could well set up a similar framework where the various characters all have personal objectives (either individually tailored or randomized, as you suggest) that serve to give them all reasons for operating in a clandestine manner and keep secrets from each other - making it hard to suss out who the mole/moles are.

You should take a look at the new Alien RPG as well, it does a bunch of stuff with Hidden Agendas, especially in Cinematic play. I’m running it tomorrow for the first time and I’m very curious how it’ll work out.

Yes, Alien was more or less where I got the idea that it might work, and from what I understood of the cinematic scenario in the quickstart it does the thing of randomly assigning the role of the synthetic to one of the pregens. That struck me as a clever way of doing it. I’d be interested in hearing how it plays out for you!

I wouldn’t want it in a long running game, but love traitor type mechanics in one-shots. My sci-fi RPG Starguild: space opera noir was always designed to support secrets and betrayal all over the place. In one-shots every PC has a secret agenda randomly assigned for that scenario, and it has provided many memorable moments in games. In a nutshell, this does two things

The second part of that rule is important because it is fun when secrets (traitorous or otherwise) are revealed during play. I’ve found that if there were secret agendas that people followed without ever revealing anything like a rational traitor, it dramatically reduced the fun for everyone. 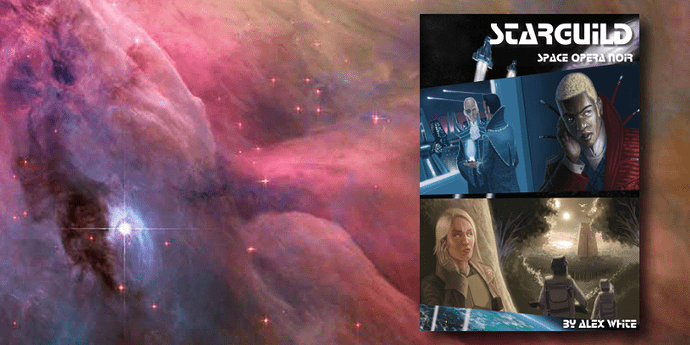 In space, nobody can hear you scheme… Space Opera style science fiction, with a noir twist! Starguild: Space Opera Noir is a traditional tabletop RPG. In 238 pages futuristic weapons and faster than light travel meet heartbreak, decadence and...

Yeah, this is almost exactly the way I’m thinking about it as well! And explicitly for one-shots or short couple-of-sessions games at the most.