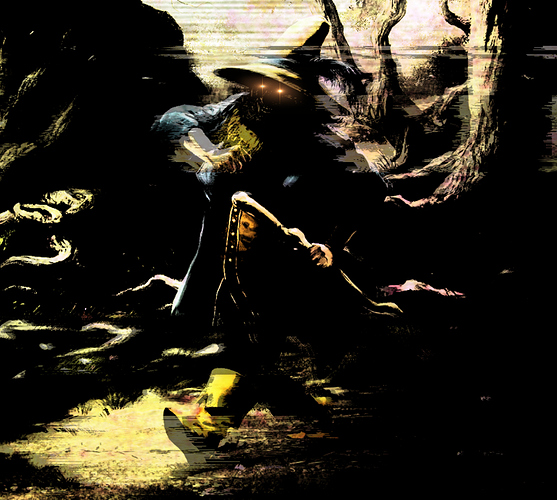 Sky blue jacket, with those fine boots of yellow.

You’ll see Old Tom in his boots of red."

Trophy Dark is “a collaborative storytelling game about a group of treasure-hunters on a doomed expedition into a forest that doesn’t want them there.” It is rules light, narrative heavy and permeated with tragedy.

No Experience required of system. Surface familiarity with Tolkien may make it more appealing, but it’s certainly not necessary. This is the first of two sessions - with four players, I wanted to make sure there was time for the game to breathe as required.

Contact : Players will be contacted about a week before the game, where advance material will be mailed over. If no contact is heard from a player before 24 hours in the game it will be assumed they can’t make it, and their place will be offered up.

Concept : rather than Trophy’s traditional set up of treasure hunters, you play a group of the little folk trying to make their way through the Ancient Forest that lies at the border of their lands - though they all will have their own reason for making this journey which can lead them astray. The incursion features its own occupations, backgrounds and drives suitable for the characters, and a replacement for rituals - “Songs.”

Aim : to collaborate in creating an adventure of these hobbits, and to to track the sad demise - whether physical, emotional or spiritual of the little folk as they journey into this oppressive, predatory environment.

Tone & Subject Matter : As this is the first time I’ve ran the incursion, I’m hoping that we get an interesting energy from having our own shadowy analogues for many of the characters in Lord of the Rings going to very different places. It’s inspired by the material of The Old Forest (and chapters before and after) than Lord of the Rings, but we’ll be placing it in our own world. Underlying thing is “how awful it would be if those hobbits were trapped in the worst of places and found themselves, in extremis, significantly less lovely than we believed them”.

The X-card will be in use, as will the Gauntlet Code of Conduct (https://www.gauntlet-rpg.com/community-code-of-conduct.html). We’ll run with Open Door, and Lines & Veils will be defined before the game. Special focus will be given to any elements of the pre-generated content we want to excise.