What do you want from a game setting?

To date, much of my design work has focused on games that either have no pre-defined setting, leaving you to create it yourself, or give you nuggets of inspirational material and mini-scenarios but without any sense of a wider setting. That’s in part because of my personal preferences, and in part because of my desire to design games that support creativity at the table rather than handing over pre-created stuff.

But I’m increasingly aware that there’s a hunger in much of the gaming community for well-crafted setting material. So I’m thinking hard about how I can give people some of that in my latest project, without locking myself into generating endless setting books.

Anyway: the thing I want your input on is, what do you value in a game’s setting material? What are you looking for overall? Please try to focus on what you enjoy and make use of as a player, not any kind of perspective on what “should” be in a game setting, or the best way to design it.

My own view: To the extent I want this at all, I want:

I want evocative nouns and suggestive verbs. I want to be inspired by what is in the setting, and I want some signal to what it’s good for. The former is, if not easy, is straightforward to define, while the latter is harder. I was cool elements configured in such a way that they suggest the story they want to the tell and the conflicts they want to explore.

An example of this is Numenera, which I should quite like. However, I find it a fairly airless setting. Its nouns are good, but it is a setting that is oddly bereft of verbs.

As a player, I like a setting to have “room” for my character to do stuff in, but not so much room that I don’t get to bump into things from the setting - NPCs, organizations, obstacles, etc.,

I also prefer at least a bit of heroism or at least “goodness” in my character, so settings that are too grim or too oppressive do not appeal to me. Even if I am playing a villain, I want to be able to portray that villain with some noble or redeemable feature. But conversely I also like to portray heroes with some fault or shortcoming.

What I want from a setting are a bullet list of possible answers to the question: “what do we play to find out?”

I want a setting that challenges or upends the cliched preconceptions of the genre. eg, for fantasy, a settings that give me a new vision of multicultural and multi-humanoid societies to drive the Tolkien-esque preconceptions out of my mind.

I like having a few highly detailed examples, without pages upon pages of mundane details for everything. I love being able to include details in my games — what do people eat, what are their buildings like, what do their streets look like, what does an average person do with their day — but I want those as inspiration, not as some dull collection of preassembled small towns and taverns.

I want evocative templates and archetypes that are easy to ingest and then allow me to spin out the various instances as needed.

(That said, some sort of appendix of “drop-ins” never hurts, just so long as I don’t feel like I have to wade through them in the primary text.)

Avoids pages and pages of history.

Absolutely. I find, particularly in the trad space, that few books approach the reader’s time with economy. I’m probably not going to finish an RPG book, particularly not a 200 paged honkin’ big hardback with two-column small print. Front-loading a setting book with a ton of history means I either won’t read it at all, or read the history and then run out of steam before I get to the material that’s actually more directly relevant to our characters.

I want evocative archetypes that tell me what kinds of characters the setting is built to support. I need some basics about the what the setting itself wants to be: is it a science fiction with a spaghetti western vibe, or a weird fantasy with echoes of Clark Ashton Smith and Robert E. Howard, or a post-modern dystopia of rebellious gene-engineered worker-drones? And I would love to see how the setting expects the PCs to interact with each other and the world
Are they scrappy rebels, sneaky grifters, wandering gunslingers, preternatural troubleshooters, or a merc company hired by suspiciously anonymous clients for ever more suspicious missions?

I’m currently trying to create a set of home planets for an SF game. Everyone is human, but they come from differing cultures and from planets that have very different economic and political positions. Also, in the game the homeworlds have all been destroyed or occupied, and their impact is therefore more about the social footprint of the fact that character A is from a rich and powerful planet, but which has now effectively lost all of its wealth and power, while character B maybe resents character A and sees them as arrogant/rude/whatever.

I’m trying to write them from an outsider’s perspective. I’m trying to avoid saying “your people are like this”, so I’m explicitly presenting stereotypes, as well as more factual stuff. So, the stereotype about planet A is that the people are emotionally repressed and hyper-efficient, while the stereotype about planet B is that the people there are clever but a bit manipulative. Planet A is this big hub with loads of commerce and industrial infrastructure while planet B is a bit of a backwater but immensely rich in valuable minerals.

Sorry, I’m kind of thinking aloud here, but if any of that sparks interesting responses I’d love to hear them.

My preference (and what I build, since Diaspora but still today in more recent games) is to have some established tone through a little very terse micro-fiction and through the rules themselves and then provide some procedures to give you enough material to develop your own space that’s consistent with what’s in my head when I play.

As our games have matured I feel that we’ve gotten better and better at this, steadily reducing the load on the ref while at the same time making that creative space available to them. I love to create, and I build games for people that also love to create without demanding they do so from whole cloth.

I am certain this is a tiny niche but it’s mine dammit.

I want to see a setting which is tottering with potential conflicts all over the place. I loved a lot of the details of Skyrealms of Jorune when it came out, but was disappointed because the whole setting was static and ‘safe’. I want to see threats large and small which are jumping off places for adventure, which are rich providers of inspiration!

I would say yes.

As a player, it means that I know I can lean into the stereotype (which arose for a reason) or I could expressly fight against it but know that people are likely to react towards me in a particular way ‘just because’.

I recently read a blog post on this topic that really resonated: 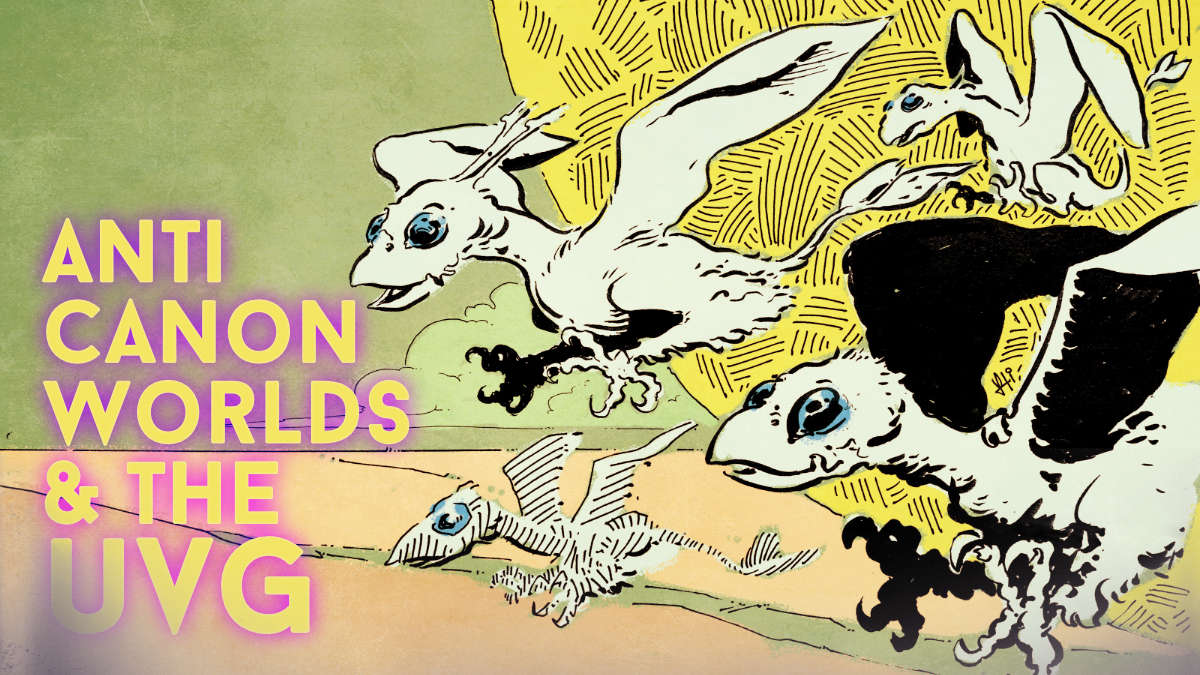 Anti Canon Worlds and the UVG

Or why you can relax about getting things 'wrong'. Against Canon Sometime in the early-to-mid 1990s I discovered the Discworld of Terry Pratchett. I was blown away. I loved the dry humor, the terrible puns, the mockery of human foibles, and the...

The tl;dr is basically that the best way to write a setting is to present many possibilities, some of which may be contradictory, and sort out what’s true through play. For my GMing style, I tend to like this approach.

As a GM, I like broad swathes of inspiring material - conflicts, locales, myths - and lots of blanks I can fill myself. I really don’t like meticulously detailed settings. First of all, there’s too much to read, and second, I want to be able to make a setting “mine” but adding lots of details myself. The first edition of Exalted was great that way - that setting was familiar enough to understand quickly, but bursting with new and exiting ideas.

For your SF setting: I think the outsider perspective is not a bad way to go. It leaves enough room for lots of interpretation by the players (“Everyone thinks we are repressed, but really, we have to wear masks because of the atmosphere, and we convey emotion with our hands instead”), while everyone else has a rough idea about what to expect.

I would say yes but, as a recovering Anthropology student, it might more interesting to see it less in terms of stereotypes than competing norms values. I don’t think they, in this situation, necessarily see themselves as emotional repressed, rather they see everyone else as a bit full on, maybe embarrassingly uncouth. This also helps getting away from the sense that ‘all people from planet A are like this’ and moves to a place that says ‘people from planet A feel like this is the appropriate neutral place to be and everyone else is different’. I guess, depending on the game, the trick would be for the relationships to just flow naturally from the tension between different character’s norms and histories, without having to lean so heavily on having an archetypal personality that everyone from planet A somehow shares.

I can’t be bothered anymore to read hundreds of pages of fictional history to play a game of let’s pretend. A couple dozen pages, max.

I’m with everyone saying ‘brevity.’ An addendum I’ll make is: the more integrated into the normal text and flow the the game, the better. I have no idea how much of Blades in the Dark is setting info, but it’s more than you’d think by just looking at the table of contents. If you can make the rules and the setting work together, chef kiss.

This is definitely what I want to strive for. I feel drained reading through the encyclopedia style pages of most setting books. Expertly piping setting info into the example text and flavor of the rules material is the way to go (if also quite difficult to write).

To add to that: one way in which, say, Wizards of the Coast does this outside their setting books is with lots of asides, in fiction quotes, and bonus material scattered throughout the rules. While I prefer a more integrated approach, if you enjoy writing fiction and have the formatting down, I feel this is also legit.