When your GM values roleplay and cunnning over a resolution system

A friend of mine is getting back into Gm-ing. At first he showed interest in PbtA games.
But when we played together, I quickly realised he valued roleplay and cunnning over a resolution system.
It reminds me of the OSR vibe. But he’s not into Dungeoneering, he rather like Star Trek ^^
So, which game am I supposed to suggest to him ?

Stars Without Number would be the immediate kneejerk reaction

Maze rats! It’s what the whole game is about.

Might I suggest Dread? It’s a horror themed ttrpg, so it may not work for your group, but the rules are so concise you can’t ignore the specific call for when a mechanical resolution is required (basically, any situation in which failure would cause the character to die). Character sheets are completely mechanic free, so in a sense, roleplay and cunning is all you have to rely on.

I’m going to go out on a limb and recommend Star Trek Adventures.

Isn’t there a Goblinoid Games (Labyrinth Lord) Trek game? I played one session with Trey from Sorcerer’s Skull GMing long ago. Something about a pleasure planet with trouble. I intentionally played a red shirt but survived.

I’m a little confused, because when you say “he valued roleplay and cunnning over a resolution system.” I think “That sounds like a good fit for a PbtA game!”

I feel that PbtA and OSR have a lot in common in a lot of ways – that fictional positioning is more important in both than it tends to be in more traditional games, and that clever solutions tend to be rewarded because it’s both within the GM’s purview and within the spirit of the game for the GM to say “Yes, that’s super clever, so it just works.”

So I’m not sure why you think PbtA is a poor fit?

That said, if you really want Star Trek, you can do a lot worse than Lasers & Feelings, since you can’t get much more loose in terms of “when do you engage the mechanics” than that.

Thanks for the name dropping^^ I’ll study those games

Airk , well he disliked some ‘sharp’ moves such as ‘investigate a mystery’.
He felt that the mechanic would grant solutions without the player racking his brain ^^;
You know what? I’ll ask him again, just to be sure

Well, not all PbtA games have “investigate” moves, but moreso, I think he’s misunderstanding how those work – which is not really uncommon, honestly.

The trick is that you can’t just roll the move. You have to do something to trigger it. What is his plan if someone says “Okay, I’m going to hit the internet and research that topic”? If there’s no information on the internet, they don’t get to roll, but if there is?

Airk , well he disliked some ‘sharp’ moves such as ‘investigate a mystery’.
He felt that the mechanic would grant solutions without the player racking his brain ^^;
You know what? I’ll ask him again, just to be sure

I figured I’d chime in since I’ve noticed a similar thing. I really enjoy the PbtA game Monster of the Week and have run it many times. One thing about that game which initially confused me was that players could learn fairly sophisticated facts about the monster with a simple roll. I had come up with intricate mysteries and puzzles but the players could make a roll to get through all of that.

Eventually I realized that the game doesn’t lend itself to being run that way, and the focus should be on tracking down and fighting/capturing the monster, not just the investigation part. It’s important to have a good mystery but the assumption should be that the players will always solve it eventually (possibly just with some complications along the way).

However, plenty of other PbtA games balance this differently. For example, Dungeon World is probably closer to what your friend wants. The two informational moves (Spout Lore and Discern Realities) only deal with facts that the player can recall or sense, not the work of deciding what to do with that information or how to interpret it. I think this is intentional, since DW wants to be compatible with existing D&D-esque modules which assumes that figuring out puzzles “by-hand” is part of the fun.

I think it’s very likely your friend could find (or adapt) an existing PbtA game to this style of play, if they chose to go that direction.

I’m a little confused – “Investigate a Mystery” ALSO only deals with facts that the character can recall or sense. You can’t just say “I want to Investigate a Mystery!” and expect the GM to say “Okay, roll +Sharp!” That’s not only unfun, it’s contradictory to how PbtA games are supposed to work. You need to be able to explain how you are getting that information, or you shouldn’t be able to roll? If information about the Monster can only be found in the Secret Library of Dr. Brain, then you need to find the Secret Library in order to roll this move. Fiction first, right?

While the players must still take appropriate actions in order to make the Investigate a Mystery move, they get relatively reliable and detailed information from the result, as opposed to having to interpret things themselves.

Concretely the move allows players to ask the following questions:

The issue isn’t so much that players don’t have to take appropriate actions (e.g. visiting an archive, interviewing witnesses, analyzing a crime scene), but rather that once they take those actions, the answers to their questions remove a lot of uncertainty around what is happening. For example, researching vampirism in a Jesuit archive might reveal its weaknesses (“What can hurt it?”) with relative certainty, as opposed to giving a list of rumors or fables which might need to be narrowed down or crosschecked against other sources (or even tested against the monster).

In other game systems (such as Dungeon World) there’s no guarantee that any of the moves will give the players such detailed high-level information about a monster’s weaknesses, motives, history, etc. (This is not to say that DW’s moves will never give this information, but that the GM has a lot more leeway around what might remain mysterious versus what is known.)

I don’t think I was arguing against “fiction first” (I certainly didn’t mean to). But I think there’s a valid point here: different PbtA games choose to give more (or less) narrative strength to different types of moves, which will be more or less effective for creating different kinds of experiences.

I’m a little confused – “Investigate a Mystery” ALSO only deals with facts that the character can recall or sense.

After writing a somewhat long-winded response (sorry!) I realize I should have responded to this point.

My claim is that this is not completely true – questions like “What can hurt it?” deal with a lot of high-level analysis and reasoning, not necessarily just something that was recalled from memory or seen in the surroundings (either by representing a character synthesizing lots of facts/sources, or introducing a single, reliable narrative source for the information).

I think this is appropriate for the kind of stories MotW wants to tell (learning enough about a new monster to catch or defeat it) but not necessarily others (such as a long-running, mysterious investigation scenario where hard facts are difficult to come by).

I see your point with the “This move reveals too much information once information is revealed” discussion – that’s definitely an issue if you want to run a heavily investigative game (though I think the presence of these questions makes it fairly clear that that’s not the kind of game Monster of the Week is).

I don’t entirely agree that there’s a lot of “analysis and reasoning” involved in answering most of the Investigate a Mystery questions, but at the end of the day, that’s neither here nor there – we are way over focusing on a single move in a single game that is in no way reflective of how other PbtA games handle this sort of thing.

To kinda expound on that distinction: you’ve got Dungeon World with Spout Lore, which is a deeply different kind of investigation move. While the GM often gives you useful information, it’s not necessarily the specific sort of usefulness that you want. You have to apply that knowledge in a useful way. What comes out of it is this emergent pot of data that you have to make sense of. And because it provides interesting information, it can spawn more Spouting Lore and more questions in the future. It’s about growing the mystery, in a sense.

Compare to “Investigate a Mystery”, which also gives you data, but each bit of data is tagged with a useful purpose. You don’t have to make sense of it, because the sense has already been made. It closes off questions because it provides solutions.

Yes, but I think the analogue to “Investigate a Mystery” in Dungeon World is “Discern Realities” not “Spout Lore”.

Anyway, regardless, I stand by my earlier assertion that focusing too much on the “Investigate a Mystery” angle is probably a little bit of a red herring in this discussion.

Yes there is - Starships & Spacemen 2e: 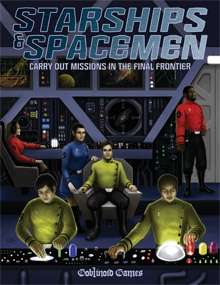 Boldly explore the galaxy in search of alien civilizations! You take the role of a Military Officer, Technical Officer,

27 posts were split to a new topic: PbtA games and player cleverness